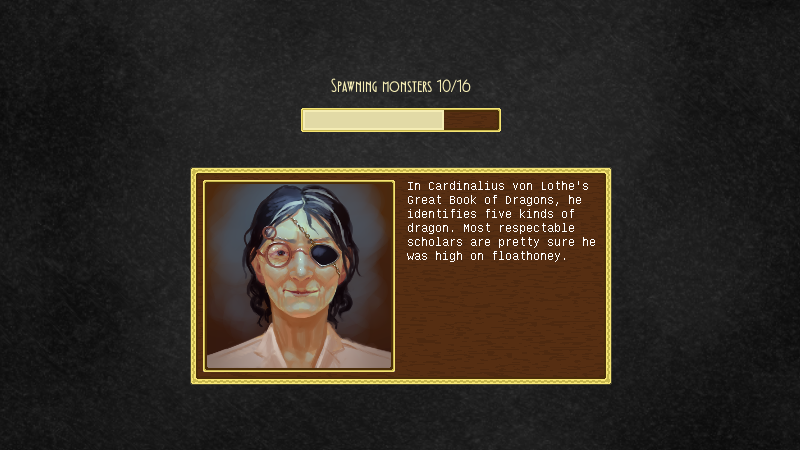 I was writing notes for Airships' translators, and realised that I was getting quite chatty in some of them. So I decided to go through the world background lines you see in the loading screen and add some comments.

Counterfeit floathoney is made by mixing powdered Suspendium and rhododendron extract into normal honey.

Floathoney is based on "mad honey", which comes from Nepal and has hallucinogenic properties caused by toxins that come from the rhododendrons the bees harvest.

The most popular faith in the civilized world is the Trilunar one, which evolved from an earlier Mono-Lunar religion.

I wanted a generic-ish religion that isn't entirely an obvious stand-in for a real-world one.

This is roughly a religious version of Italian futurism, and deeply shocking to a still very conservative world.

Scholars can't agree on whether magic is real, but they do agree that if it is real, it should not be practiced.

There's magic-ish effects in the game right now, like the stone guardians and the resurrected kraken, but this may also just be strange science.

In Cardinalius von Lothe's Great Book of Dragons, he identifies five kinds of dragon. Most respectable scholars are pretty sure he was high on floathoney.

According to Glassile's "Creatures of the Realm", giant aerial krakens may be tamed by prayer. No one has ever dared try this out.

This one on the other hand is, well, no.

Wurm lizards become temperamental and hard to control if they have too much Suspendium in their diet.

Because they're starting to metamorphose into something different.

Turtledoves are far more rare than they were a century ago, as they are a favoured repast of airsailors.

Sadly, giant tortoises were a very popular meal for real-life sailors and suffered these consequences.

Working in a Suspendium chamber is complex and hazardous. Double pay rates are usually applied.

Because you're working with a giant floating crystal that will explode if it develops a crack, and sheds asbestos-y dust.

A Mr Stockton is attempting to sell his "safe aerial descent device" made from cloth. Sailors distrust it. The navy thinks it too expensive.

Floating biscuits are pretty normal in the world of Airships. Singing ones, not so much.

Sometimes, a giant beehive dies and crashes to the ground. A massive opportunity and a great danger for the locals.

On the one hand, floathoney is very valuable. On the other hand, there's probably a bunch of surviving man-sized bees...

Poor crofters sometimes trap clockwork wasps until they wind down, then sell the gears. Sometimes, its friends come to the rescue.

Clockwork wasps are purely mechanical creatures that need to rewind themselves at the mainspring of their giant metal hive. So if you prevent them from doing that, they eventually become inert and harmless.

A century ago, wurm-drawn field artillery ruled the battlefield. Now, it has vanished.

The equivalent of early horse artillery in the real world. But if you have airships, artillery is rather outclassed.

Any number of cults and political movements have sprung up to fill the modern world's vacuum of meaning.

The modern world always has a vacuum of meaning, a dissolution of social mores, etc. etc.

Heavier-than-air flying machines are widely distrusted, but they are clearly effective.

Planes are still useful if you have flying rocks, because they're a lot faster.

Duelling is forbidden at the naval academy, but this is rarely enforced as long as no one dies.

Implication: As long as no one important dies.

Obviously it'd be fine if it were artisanally hand-ground Suspendium dust...

To obtain the best frost wurm hide, the beast must be caught in the spring and fed throughout summer, until its skin is supple and shining.

Sadly based on what they do to arctic foxes to get pelts.

What are birds? We just don't know.

This one's from the brilliant comedy show Look Around You. And, well, in a world where the expectation is that things float rather than fly aerodynamically, birds are perhaps a bit weird.

A recent study shows that the main cause of the old empire's collapse was a lack of tea.

Well, the British empire did basically go to war over tea, or rather over the opium they wanted to sell to even out their trade deficit.

Do not ask what's inside the three moongazy pies. Just eat them, quickly, and wash them down with plenty of beer.

Moongazy pies are, one assumes, an even more horrifying version of stargazy pies. (Warning: weird things done to fish.)

The game of Floatball enjoyed a brief spell of popularity a few years ago until it became clear that the scoring was completely unfair.

There are valleys in the Goatskull Mountains where Suspendium fails to float. The locals see the rest of the world as cursed.

In other words, things are normal there. In-universe, it's because the mountains are made out of a non-Suspendium-bearing rock, and Suspendium only floats in the first place because it repels the Suspendium in the ground.

Recent archaeological excavations in the Tooth River delta have found ancient bits of carved Suspendium that were probably used for ritual purposes.

Archeologists tend to say objects were used for ritual purposes when they have no idea what they are.

What, exactly, are the moons? Were there always this many?

You'd... hope so? But it's by no means required that the world of Airships is even on a spherical planet. So, who knows.

The dose makes the poison.