To get this out of the way from the start: the crew animation system in Airships is a bit weird. But I'm going to do my best in this article to show you how it works.

Note that you should know the concepts from the basic modding guide before reading this.

Before you get started, go into the game settings, and turn on Modding Tools. This makes the animation viewer available in the Info menu, which is an invaluable tool for letting you see and test animations.

And as always, it's worth reading the data files alongside the article so you can see more examples.

Crew animations are used to show the current state of a crew unit. Are they walking, shooting, repairing, falling down, etc?

If using animLooks, each crew member uses a random AnimationAppearance from the list. Pirates don't have uniforms, after all.

A CrewType should also specify a simpleLook, which is an appearance, so the coordinates are in 16x16px tiles. Here's the one from the sailor.

Or you can use simpleLookImg, which uses pixel coordinates. Here's the one from the triplane:

The simpleLook is used for performance reason when the view is sufficiently zoomed out.

Gotcha: For stupid historical reasons, CrewType names should be all lowercase, but the name is converted to all uppercase for strings. So the sailor's CrewType name is "sailor" but its naming key in en.properties is crew_SAILOR.

AnimationAppearances specify what a particular crew type looks like. I'll cover frame-based animation first, because it's simpler, and then explain body part based animation.

Here's the AnimationAppearance for gargoyles:

frameAnimations maps animation types to animations. Gargoyles have very simple animation needs, and so the only required values are FLY_RIGHT (fly to the right) and FLY_LEFT (fly to the left).

Frame animations have the following fields:

This is the resulting animation:

Note that if a crew type can't do a particular thing, there's no need to create an animation for it. Fighting units that can't do crew work don't need the GIVE, REPAIR or WORK animations. Non-flying units don't need any of the FLY ones. And units that have minWorkingHP set to 1 can't be in an injured state.

This is all the information you need to create new CrewTypes with frame-based animations. Create an AnimationAppearance Loadable for your CrewType. Implement the relevant animation types, referencing a Spritesheet you created.

The body part based animation system is defined by three Loadables:

BodyPlan defines a list of body parts and the order in which they're drawn. It does this from four sides: FRONT, BACK, LEFT and RIGHT.

AnimationBundle references a BodyPlan and defines the movement of those body parts for each animation type.

AnimationAppearance references an AnimationBundle and defines what each body part actually looks like from each side.

This means that multiple CrewTypes can use the same AnimationBundle but "skin" them differently using AnimationAppearances.

A body part based AnimationAppearance specifies the appearance of each body part that its AnimationBundle uses, from all four sides. It has the following fields:

Images have the following fields:

Here is the head of a sailor from the front:

Excerpt from the main spritesheet showing the body parts of a sailor, with the head images indicated:

Particle emitters have the following fields:

Here is the abdomen of a mech spider with a smoke emitter:

Not all body part images need to be present. Missing ones will simply not be drawn.

The list of body parts in a human BodyPlan is as follows:

Cultists use the skirt images instead of the leg images, because they have robes. left_skirt and right_skirt swish around while skirt stays in one place.

Note that an AnimationBundle expects each body part image to be a certain size, often including a bunch of empty space around it.

To create a new AnimationAppearance for human crew, duplicate the set of body part images from an existing crew type and repaint/redraw it as needed in your new sprite sheet. If you put it in the same place in your new sprite sheet, you can even keep all the same coordinates, and only have to change the spritesheet value in the AnimationAppeaarance.

So if you want to create a new human crew type with normal human animations, this is as much as you need. You can create an AnimationAppearance that references the standard human AnimationBundle and "skin" it with your own graphics.

Here's the same sprite sheet part as before, but now redrawn to be some kind of priest with a big beard:

Now let's say you want to make a completely custom crew appearance with its own BodyPlan and AnimationBundle.

Start out by defining what body parts the crew type has that need to move independently from one another. Body parts can also be weapons and carried items. Let's say we want to make a floating robotic crew member. Since it's floating it doesn't need legs, but it does need an arm to work with, and a weapon.

Note how the draw order is different for LEFT and RIGHT because we're putting the weapon on the left side of the robot's body and the arm on the right.

Next, let's draw the parts of the bot and put them into an AnimationAppearance. We need the body, arm, and weapon from the front and from the side. We can leave out the back as we won't need to show it from the back.

Here are the sprites and the image coordinates we'll use. Note how the gun and arm image are centered on the joint - images always rotate around their center in Airships. Also, if you want to make a crew member carry resources, note that the resource image will be drawn at the bottom center of the body part it's attached to. So arms should be pointing downwards in the sprite sheet. 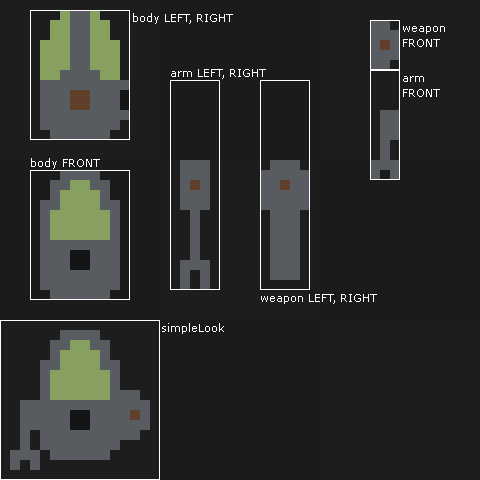 Animations have the following fields:

OK, now we get to the bit of this system which I do feel that I have to apologise for. The way you actually specify the movement of a body part.

An animation part has the following fields:

By setting the width or height of a circling motion to 0 you can have an up/down or left/right motion. And for non-looping animations, you can use the offset values to make a body part move forward or backward.

So you can do quite a lot with this system, it's just fiddly to specify. It's worth looking at the human AnimationBundle and at human animations in the animation viewer to figure out how the animations are done.

Continuing with our example, our floating bot would want the following animations implemented:

So let's start by assembling a STANDING (well, floating) animation. We can start out by simply using x/y to position the images correctly:

To make the bot look a bit more dynamic, we can make the body wobble up and down slightly:

And we can also make the arm wave back and forth a bit:

So now it waves between -0.05 and 0.05 radians every 2.4 seconds, but with a 1/4 phase offset, because that looks much nicer than moving in phase with the body.

So that's the basic way you animate stuff. One more example, of the attack animation. This one is a non-looping animation. We want the weapon to kick back as the bot fires.

The animation is 250 milliseconds long, which means we don't really care what happens to the parts afterwards. They would loop back around eventually, but we'll never see that.

The body and the arm are just in a steady position, but the gun uses the circle motion with a width of -1 and a period of 1000 to cause the gun to move backwards by 1 pixel during the 250 ms of the animation. In the next 250 ms it would move forward again, but we won't see that.

This is how you can do non-looping motions.

Here is the full example mod of the floating robot, with all the animations listed above implemented.

As always, feedback, follow-up questions, and requests for additional modding articles are welcome.