Well, looks like you all really enjoyed this years April fools for Airships, which introduced a set of in-game ads for a variety of strange and frightening products and services. While April 1 has passed, by popular request, the ads will resurface occasionally in loading screens.

If you missed them, here's all the ads, plus some commentary: 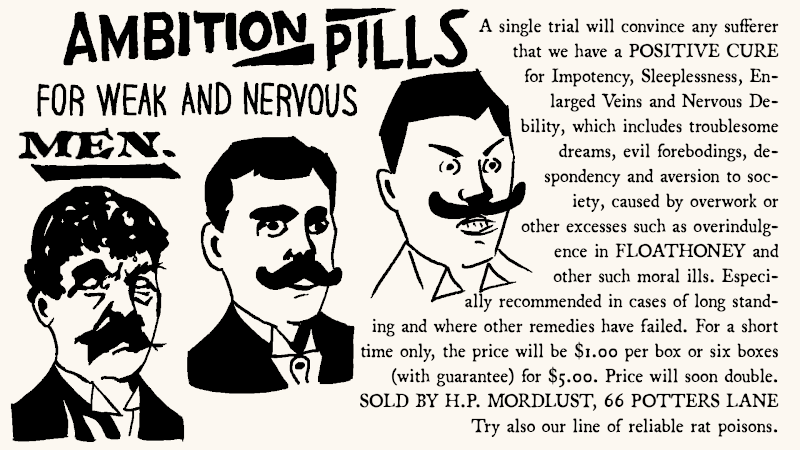 These were a real product in late 19th century America. I changed frighteningly little in this ad from the original. Given the way they're advertised, you'd expect them to contain cocaine or amphetamine, but it was actually worse: they contained strychnine - hence the line about rat poisons at the bottom. I also drew the third face in the picture to show signs of risus sardonicus, also know as rictus grin, which is a symptom of strychnine poisoning.

So why would you put strychnine into these pills? My guess is that as a nerve poison, a small dose would make you tense up in a way that might be mistaken for increased vigor. 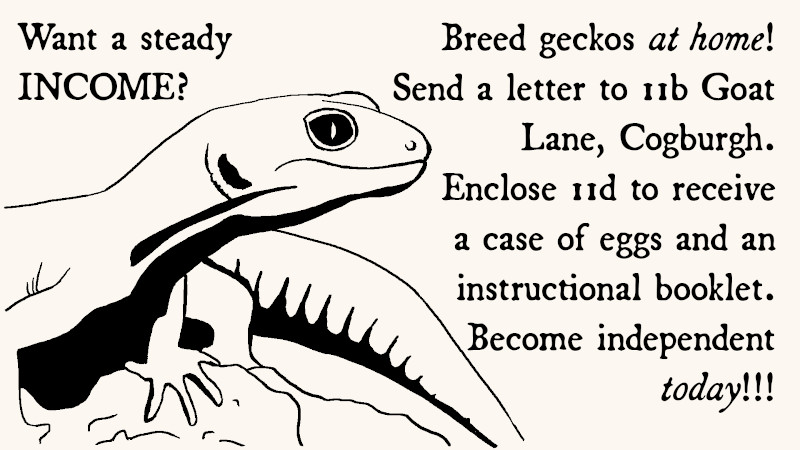 "Make easy money at home" scams have a long history extending to today. Of course, no one actually wants those geckos you're breeding, and the FAQ I wrote suggests that the real business model is selling overpriced anti-gecko tincture to the marks. 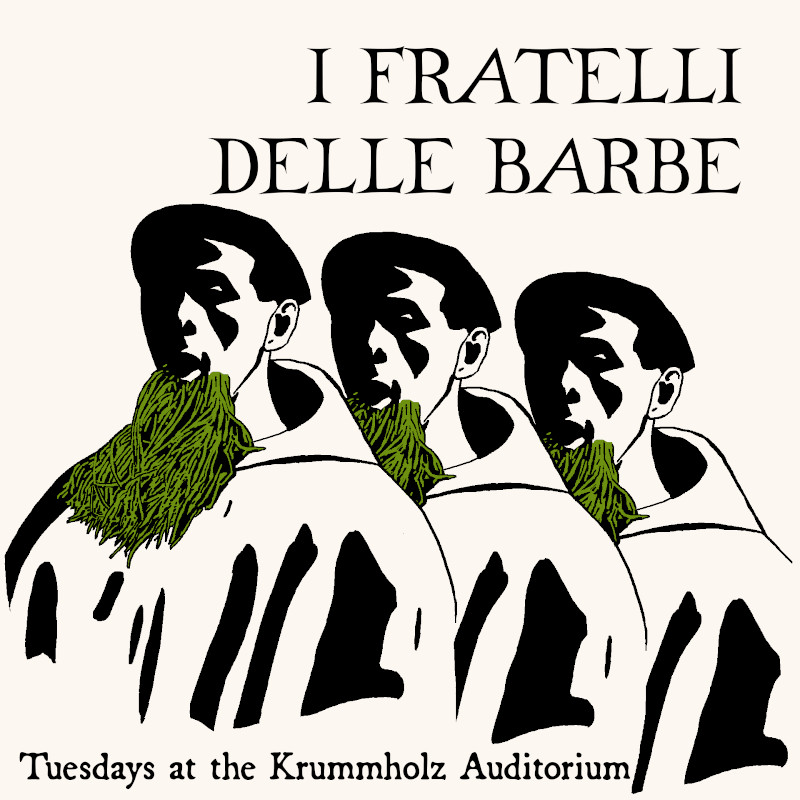 A silly pun. The three monks have beards that look like monk's beard - barbe di frate, a type of vegetable. I always get confused and call it frate di barbe instead - monk of the beard. 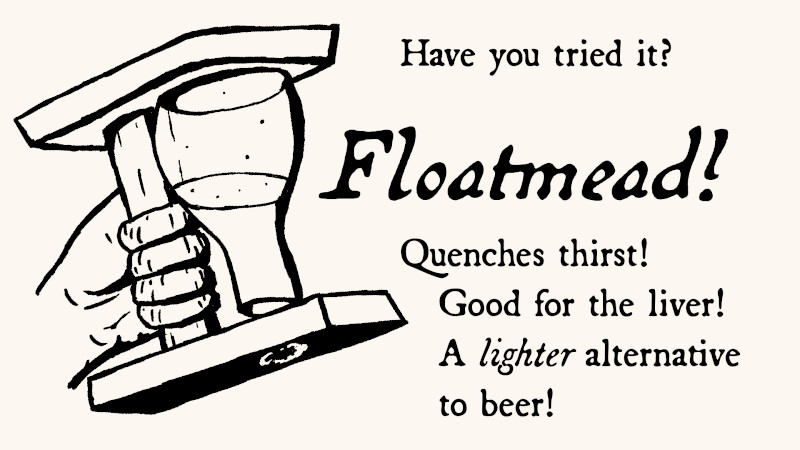 Floatmead is full of Suspendium and hence provides unique challenges in drinking. The contraption here is basically an upside-down Belgian beer glass holder. 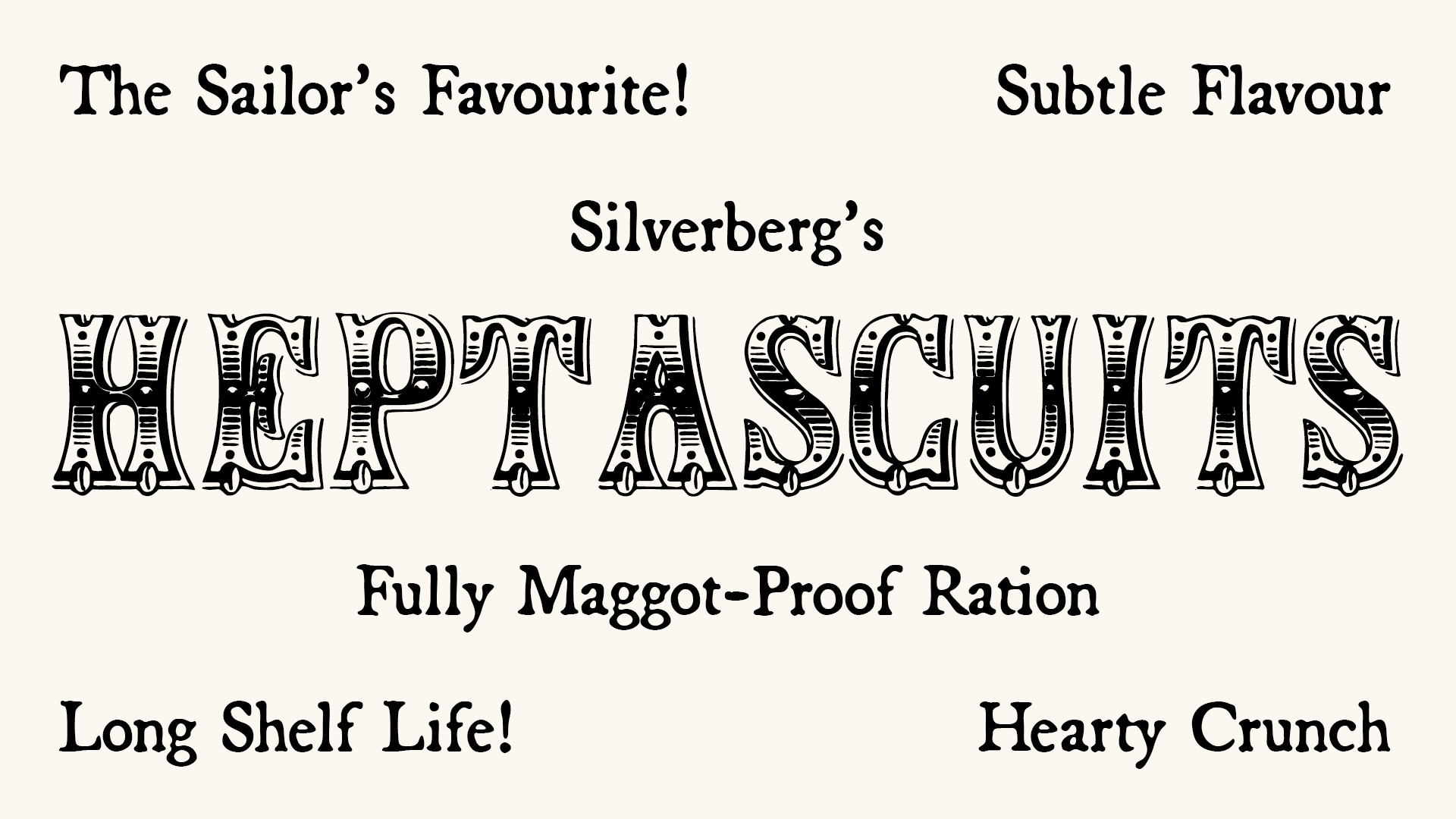 These are partially a reference to Triscuits, a long-running brand of biscuit with an unclear etymology. Likely they were named Triscuits because they were baked with electricity. But "biscuit" really means "twice baked", so it should be "thrice baked", which they aren't. Anyway, Heptascuits have been baked seven times, rendering them akin to some new kind of metamorphic rock with infinite shelf life and zero edibility. Which brings us to the other reference, ship's biscuits or hardtack, which were the standard ship's ration during the age of sail, and only slightly more edible. Remember: if the biscuit floats, it's safe to eat. If it sings, it's not. 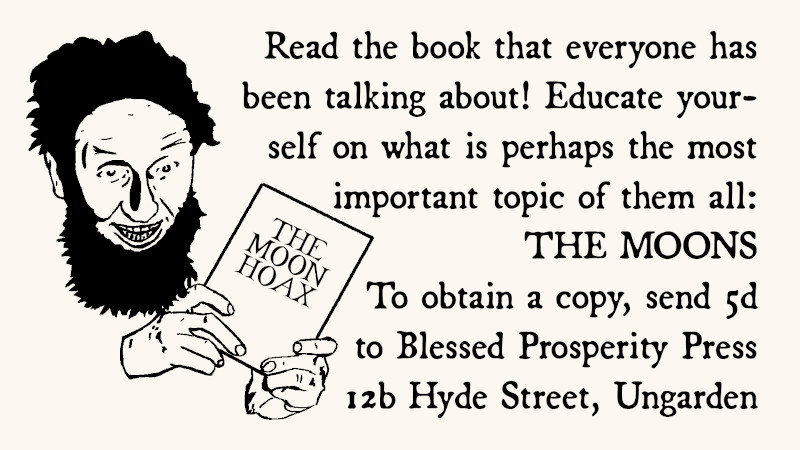 In our world, "moon hoax" refers to the conspiracy theory that people never actually landed on the moon. In the world of Airships, there are three moons, and no one claims to have visited them. But they're central to the dominant religion of the world, so this "moon hoax" book is really an attempt by cultists to recruit new members. There's a long tradition of cults and other fringe organisations operating their own tiny publishers to create materials and sometimes act as fronts. 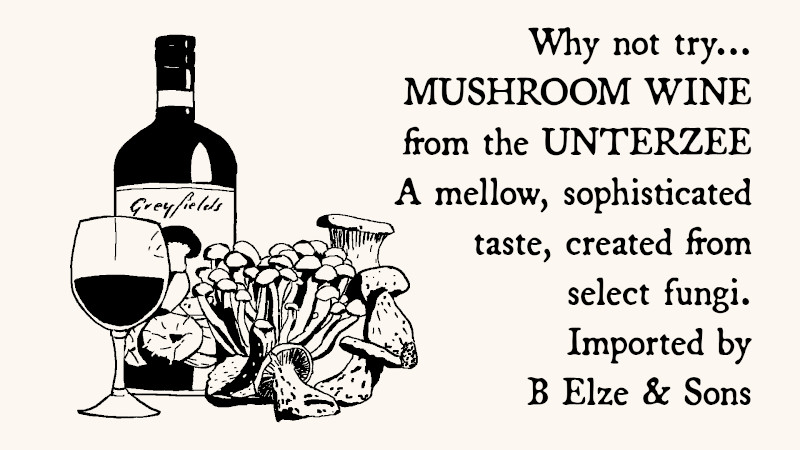 Mushroom Wine from the Unterzee! This is a reference to the Fallen London universe, and Sunless Sea in particular. I'm really pleased with how the drawing of the mushrooms turned out. 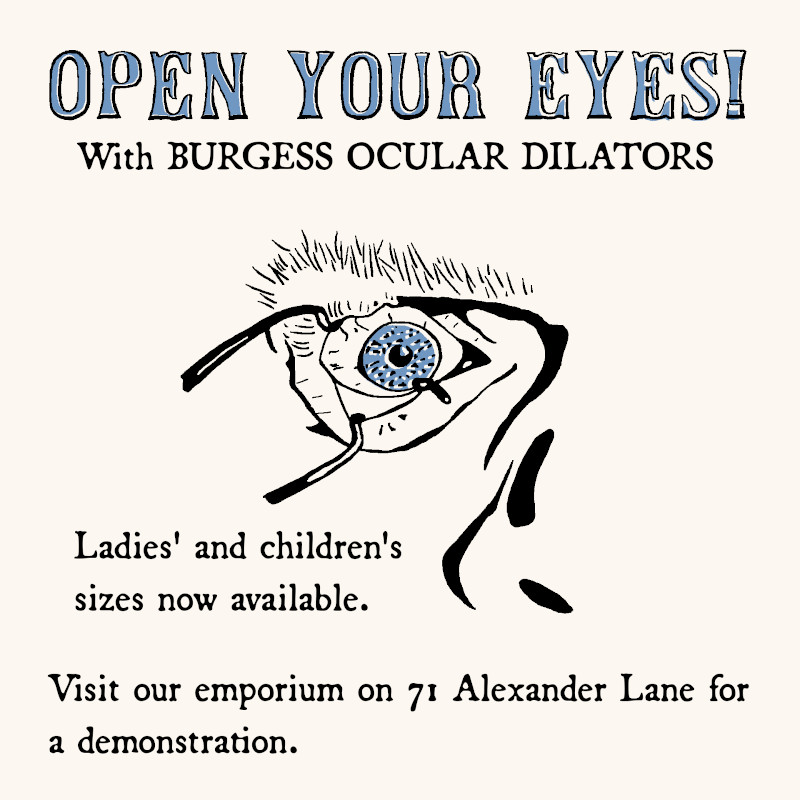 This is a reference to that infamous scene in A Clockwork Orange. See "Burgess" and "Alexander Lane". 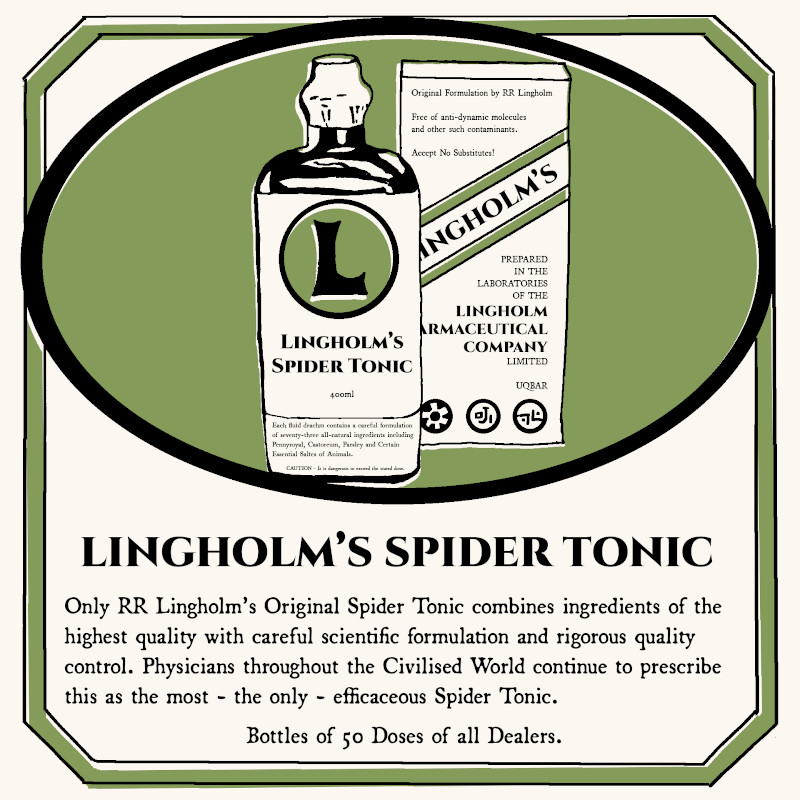 Of course I had to include a dubious "tonic". There were a lot of those in the 19th century, and some of them are in fact still around. Their ingredients ranged from harmless plant extracts to highly dubious substances, including, again, strychnine. The joke - yes, this is where I explain all the jokes - is that it's deliberately left unclear what the relationship of spiders to this tonic actually is. For spiders, against spiders, made with spiders, who knows? The offset of the color and the black is intentional, of course, meant to evoke shoddy printing.

Finally, if you look at the detail on the bottle, the ingredients include: 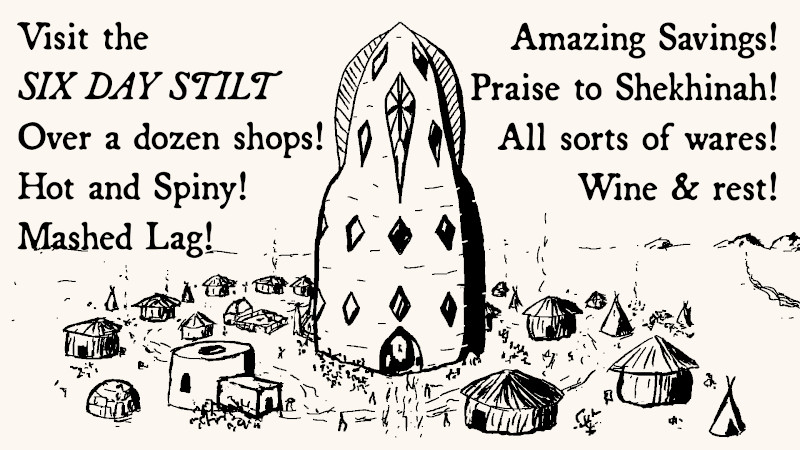 The Six Day Stilt is a location in Caves of Qud, another favourite game of mine. 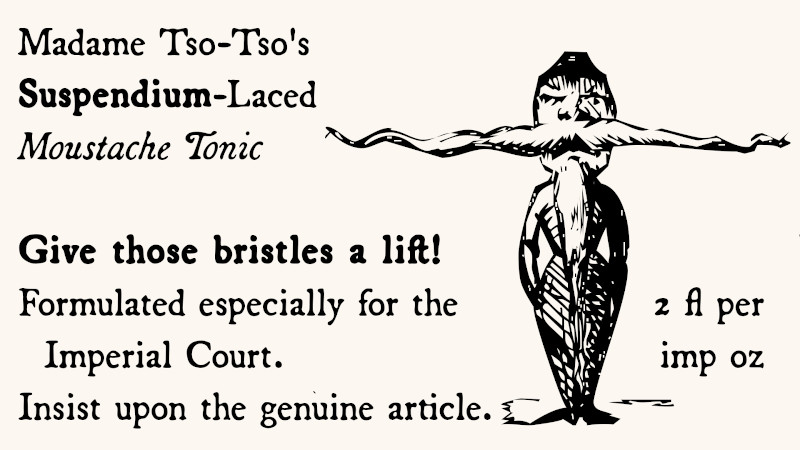 Moustache tonics are a real thing. Here's one with Suspendium in, allowing for truly improbable arrangements of facial hair. 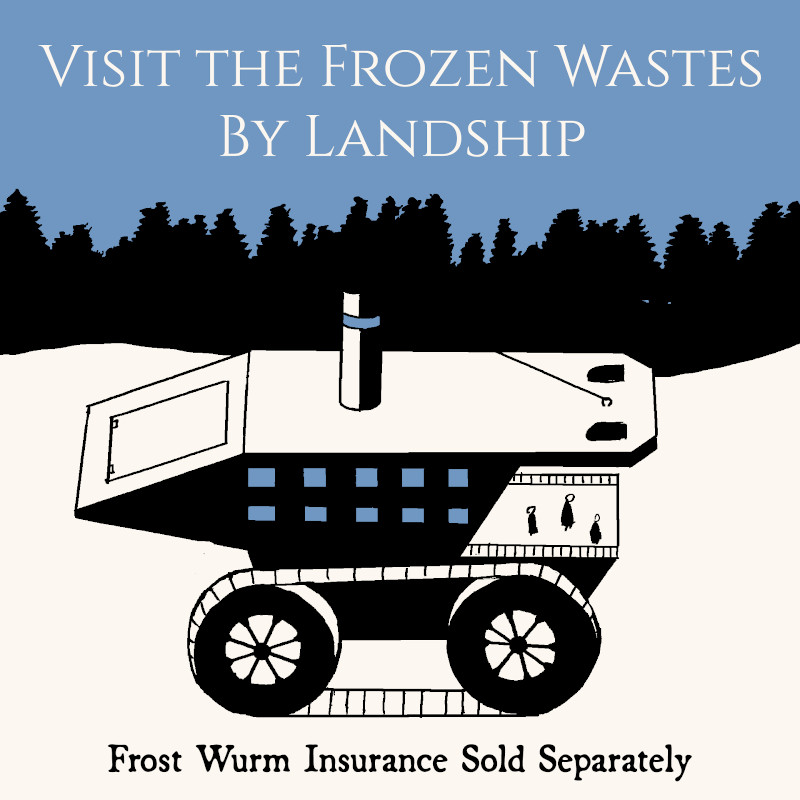 The shape of the landship is based on a giant mining truck. Note also the suggestion of two watchful eyes in the trees. 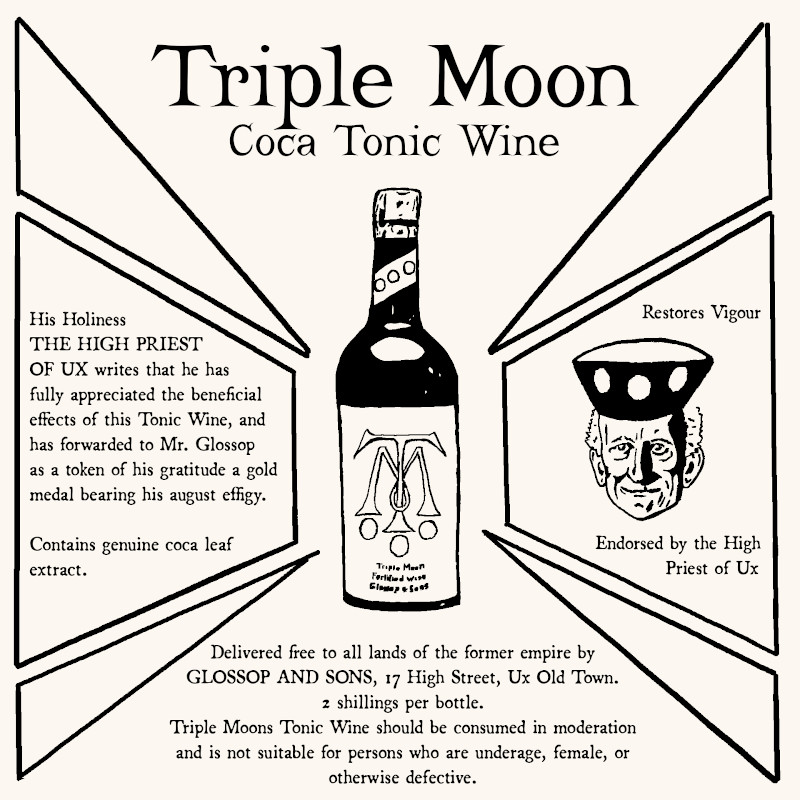 Another product that is far less altered from its original than you'd expect or hope. Wine fortified with cocaine was a real thing, and yes, there really was a brand that claimed to be endorsed by the pope. 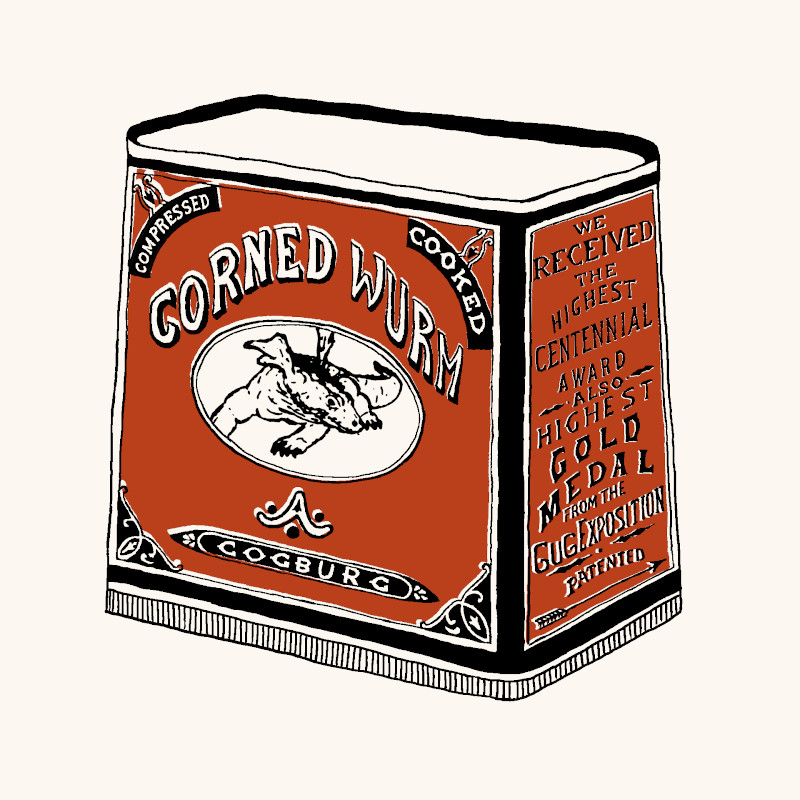 The world of Airships lacks cows, so they have to make do with Corned Wurm, made from giant angry lizards. 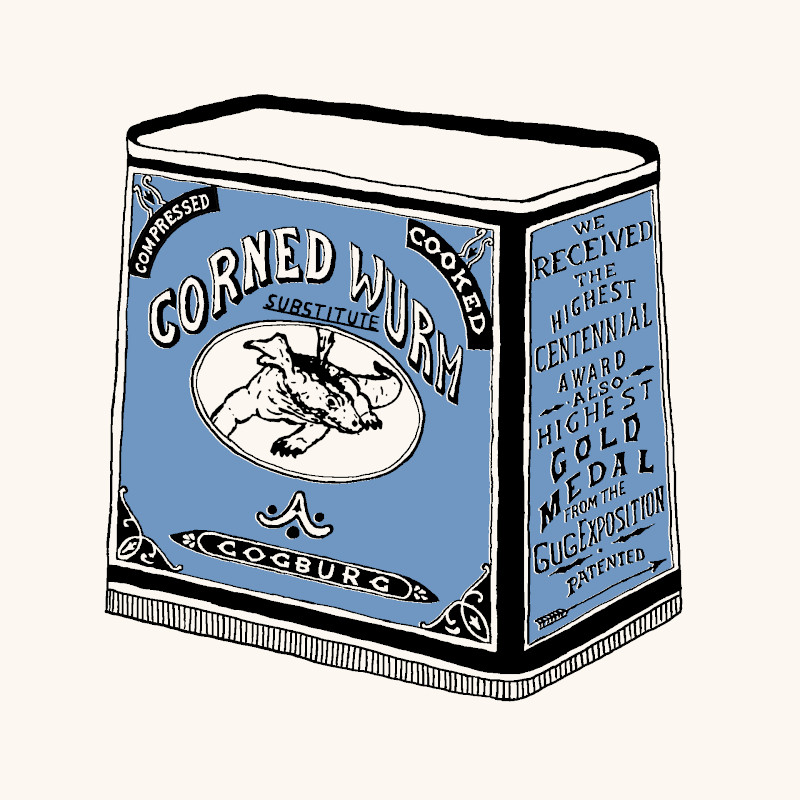 Also available in a substitute version. Please don't ask what it contains, you would not like the answer.

Finally, here's a list of ideas that I didn't get around to, because I didn't have the time, or I didn't know how to draw them: