Plus a surprise feature.

Hey look, the co-op and conquest update is out! This huge update for Airships has been four years in the making, and it's the completion of an eight-year development project.

Any number of players and AIs can fight on both sides of airship battles. You can set up custom multiplayer battles as well as fight alongside your allies in conquest mode. 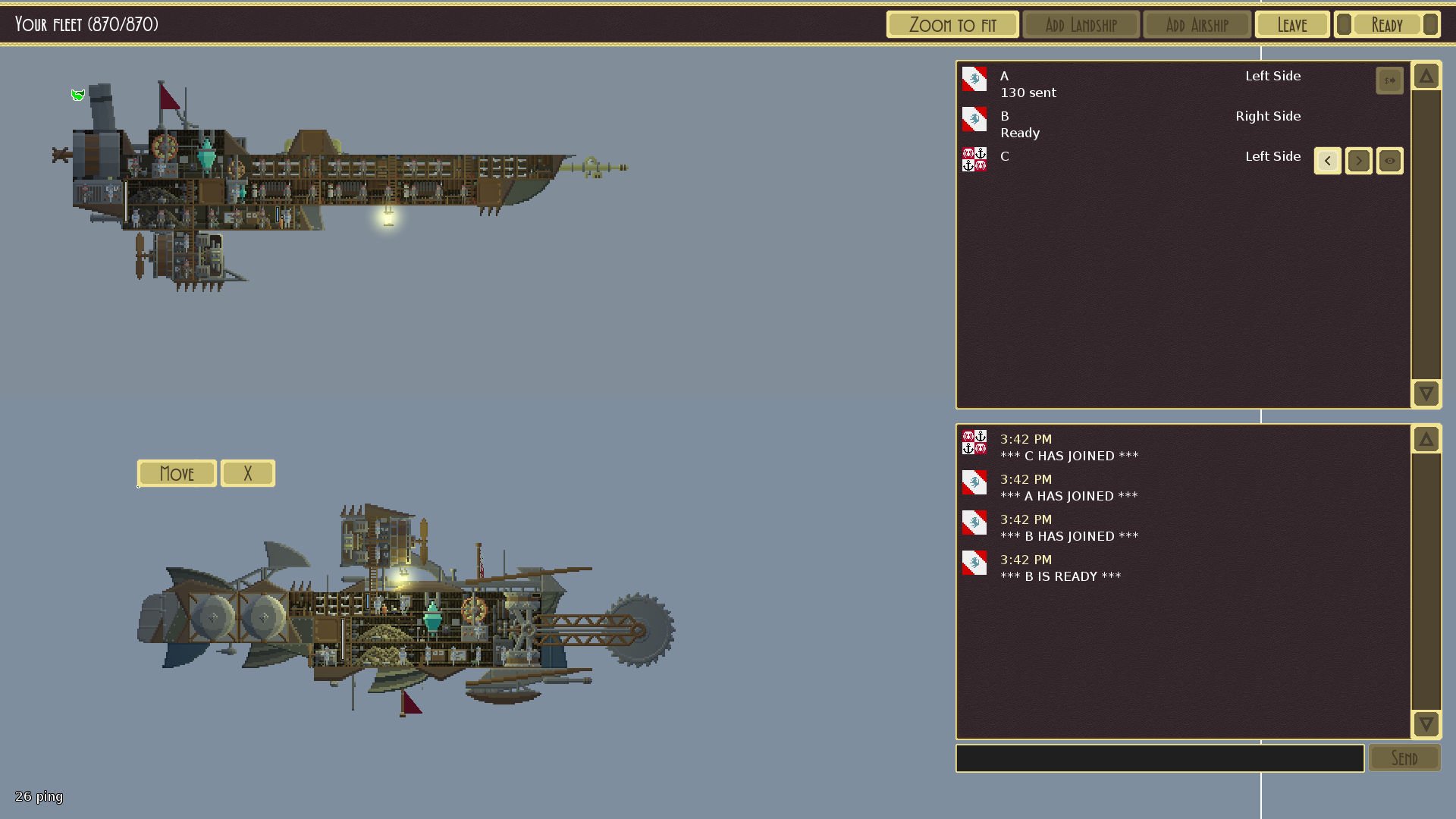 Previously, empires were in a state of permanent war. Now there is a detailed system of diplomacy, allowing for non-aggression pacts, defensive pacts, alliances, trade and research treaties, tribute, ceding territory, and more. 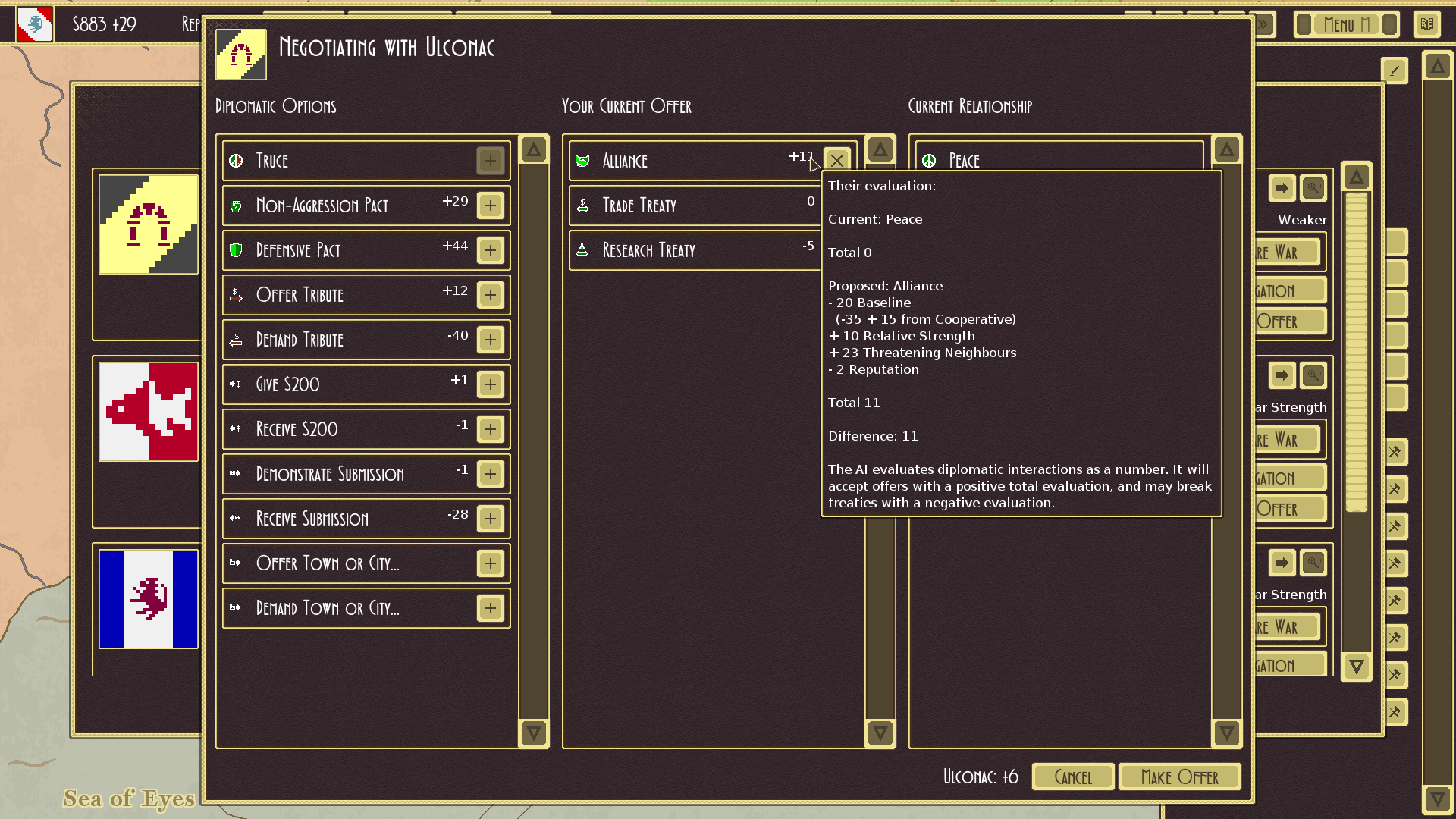 You can also send ultimatums to other empires, demanding that they accede to your terms and threatening retaliation otherwise.

The AI personalities can evaluate and send any kind of diplomatic interaction, and there are tooltips that clearly explain their reasoning.

There are no artificial limits on who you can go to war with, but you do have a reputation to consider. A bad reputation can make you the target of glory-seeking empires and weaken your espionage and counter-espionage efforts. And a high enough reputation - and a sizeable territory - can make it possible for you to win by crowning yourself emperor.

You can now upgrade your cities with shipyards to rapidly build fleets, police stations to control unrest, scientific labs, factories, skyscrapers, and more. 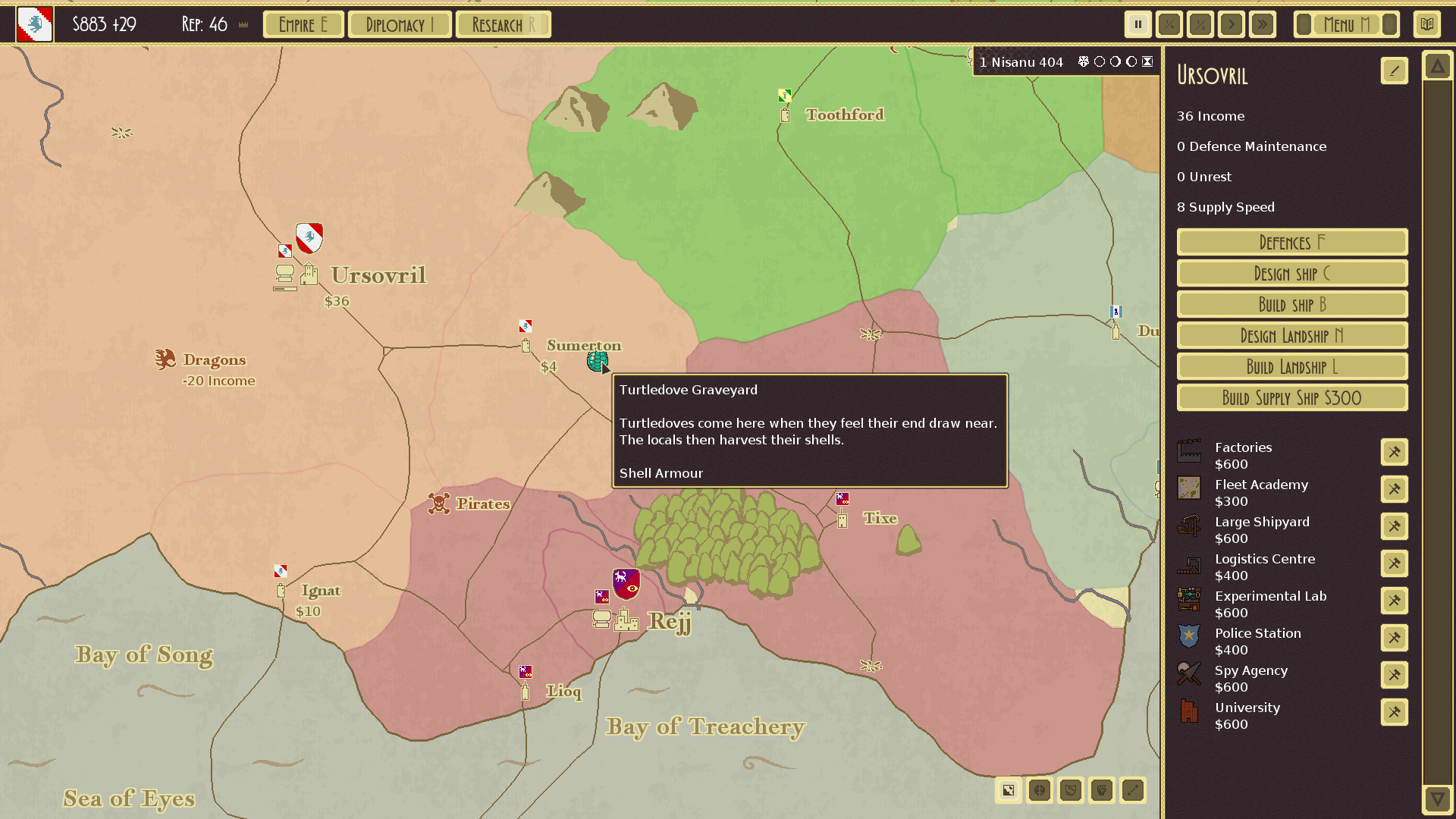 And some towns provide unique bonuses from resources such as silk, great forests, and floathoney and special institutions such as the Spire of Learning and the old Imperial Post Office. Depending on your strategy of choice, these towns may be extremely valuable to you.

As the game progresses, your capacity for ruling your empire increases, granting you faster research, more spies, and less unrest - and then a special era comes along that significantly changes the way the game plays. A long, deep winter freezes the land and makes it hard to procure supplies. An age of decadence offers opportunities for raising your reputation and destroying others'. Or a plague breaks out. 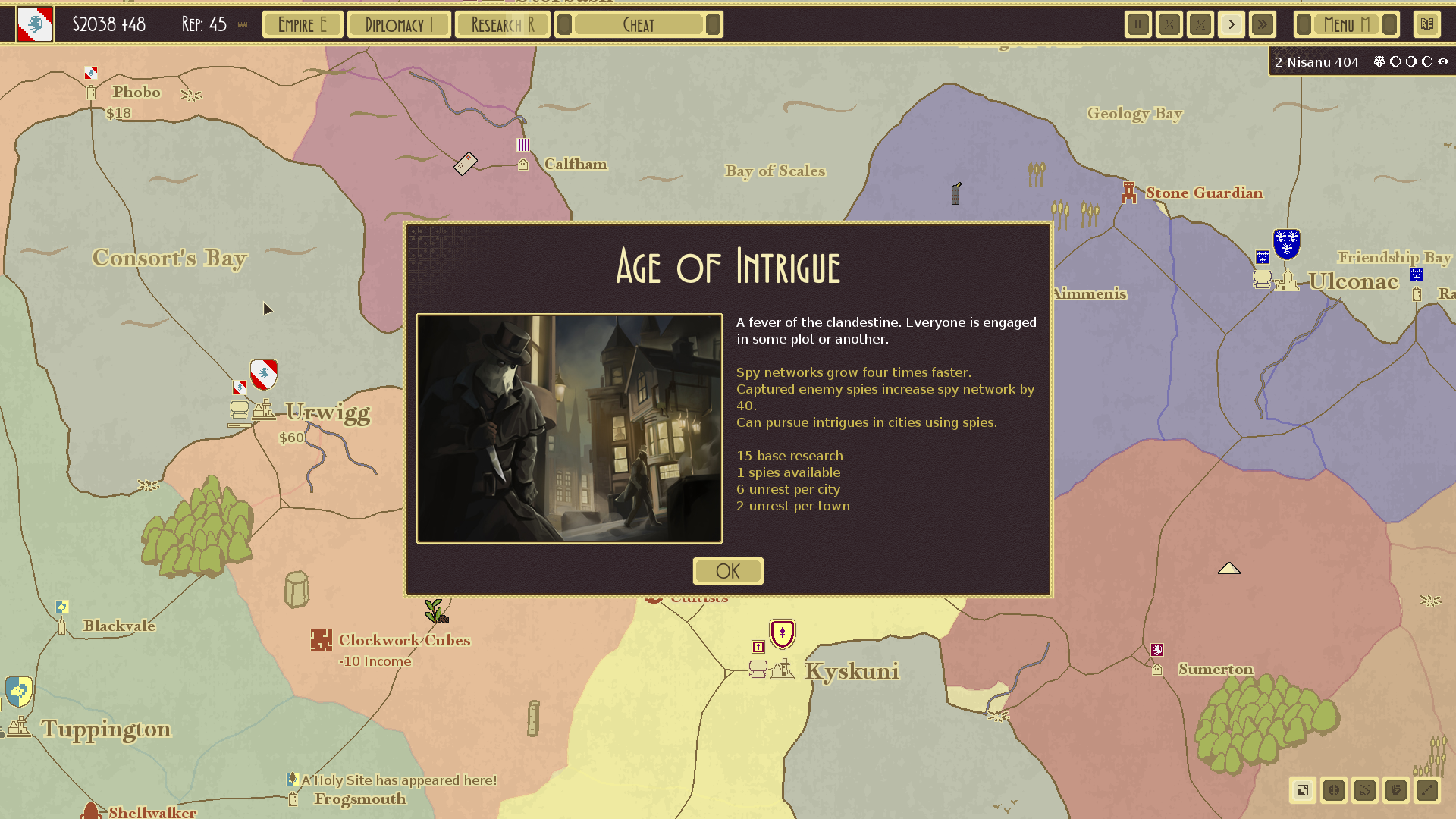 Some of these eras can be "won" by an empire, gaining it a massive boost in reputation or other advantages. For example, an age of piety is won by whoever controls all holy sites in the land.

So those are the major features. This update concludes feature development on the game, so after this, I'll be doing bug fixes and balancing, but there won't be any new free content or mechanics in the game.

I will likely do a DLC for the game, but I want to fix the bugs and take some time to rest before I announce anything. :)

Speaking of bugs, if you encounter problems with the game, send me an email or head over to the Discord to report them. We've been beta testing this thing heavily for the past months, but no game is ever bug-free.

At this point I also want to especially thank the game's beta testers, who have found a whole bunch of bugs and some enjoyable exploits, such as "you can just pay everyone to be friends with you and win".

With the feature list for the update known for months and years now, I worried that the release would be a bit anticlimactic, so I snuck in one more big feature: direct control mode. 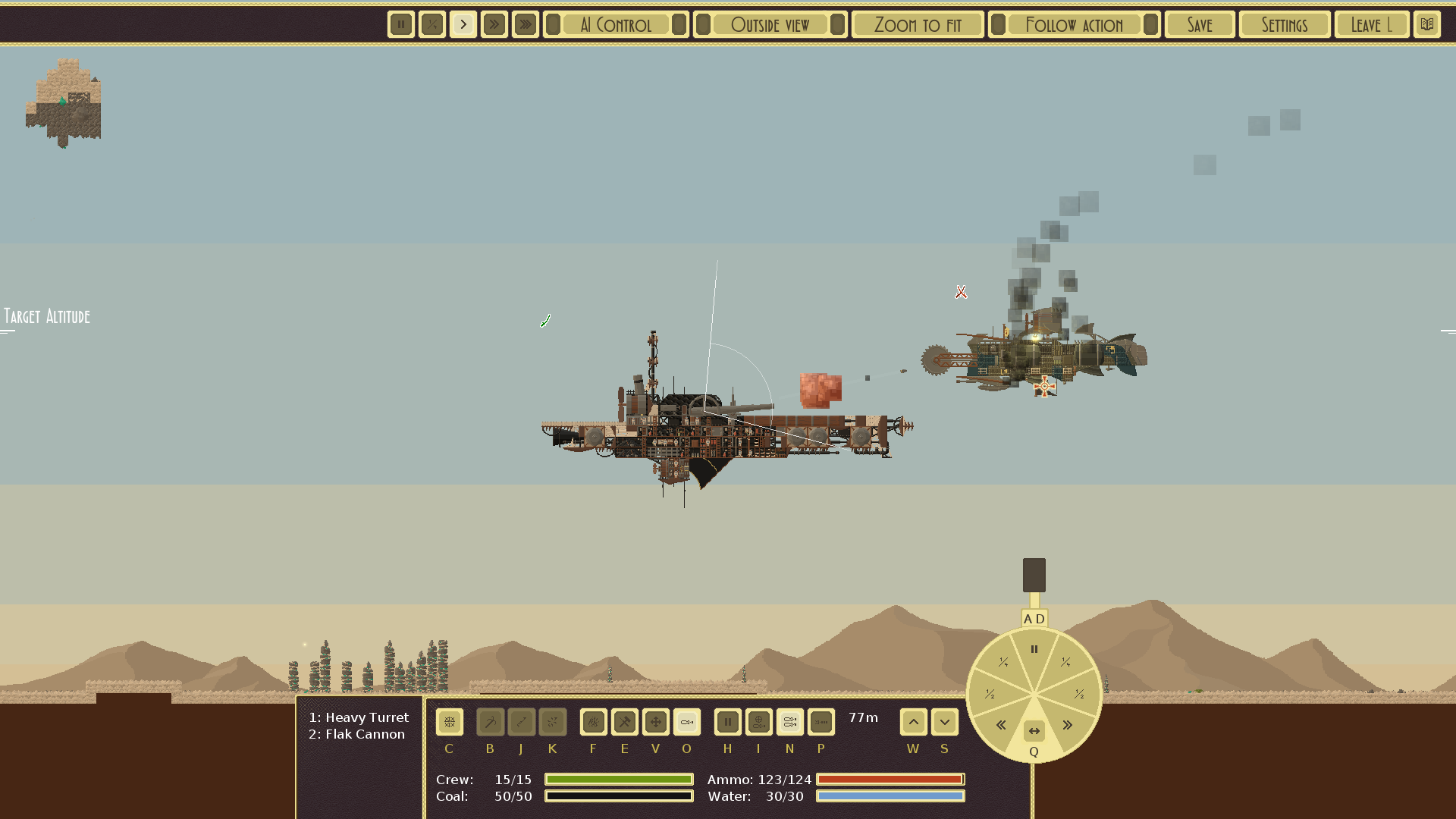 You can now select a ship, click on the direct control button, and gain fine-grained control of your craft. You can tell your weapons exactly where to fire, your engines whether to go forward, stop, or reverse, and your lift chambers which altitude to maintain. As soon as you leave direct control, your commands are forgotten, and the ship resumes normal operation. This is of course available in both singleplayer and multiplayer. :)

Finally, here's a more or less complete list of other features that I added, though I probably forgot some things: