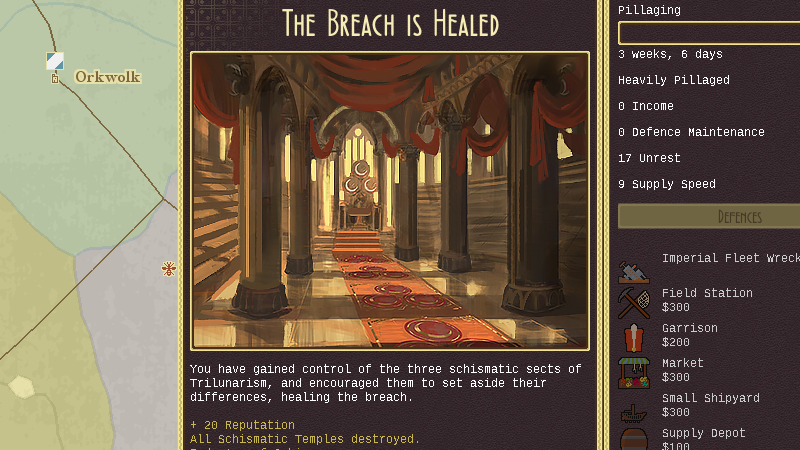 Special eras are one of the features that I introduced in the co-op and conquest update in August. These work by temporarily changing the rules of the game, and may also have a victory condition, where an empire can be rewarded for ending the era early.

Like pretty much everything in the game, these are data-driven, so you can add new ones by modding. Here's how.

(This post assumes that you know how Airships mods work. If you want an introduction to basic modding, check out this article first.)

Play in Airships progresses through a series of eras, which slowly change the game balance, decreasing the unrest from empire size, and increasing base research and the number of spies available. Each era has a chance to be a randomly chosen special era, which accumulates over time, so that while not every era is special, you will definitely get some special ones. You can see this information in StrategicEras in the game data. Of course, you can also mod this, changing the tempo and balance of the overall game if you wish.

Special eras are stored as EraModifiers in the game data. There is also always a bonus of the exact same name, which is active while the era is active. (So whenever you create a new EraModifier, create a Bonus with the same name.)

It's probably a good idea to open eraModifiers.json with your text editor so you can see concrete examples of what this article is about.

You can also download and read the example mod that adds one new EraModifier.

So apart from the name, we want a 16x16 icon for the era, a 400x300 image for the announcement dialog, and a background pattern for the dialog. (The patterns are numbered 0-24 and can be found in data/images/patterns.png. You can also leave out this value, but it's prettier if you have a suitable pattern!)

There are also three strings in en.properties associated with this modifier:

So that's the name of the era, a prose description of what's happening, and a list of gameplay effects. (\n is a new line character.)

But how does this actually do anything? By being a bonus! As you may know, bonuses can have all kinds of gameplay effects in the game. For example, the AGE_OF_PLENTY bonus is used in the EmpireStat value for city income:

There's a lot of EmpireStats that bonuses can modify - here's a full list. They can also unlock city upgrades, modules, and armour and change their stats.

Here's some examples of what an EraModifier could do via bonuses:

(Note that unfortunately, two mods that replace the same EmpireStat will conflict with each other, so you have to be a bit careful with that.)

So that's the basics for EraModifiers. But they can also do a lot more, creating what are basically time-limited events for empires to participate in.

You can spawn city upgrades at the start of an era, using the following fields:

By default, those upgrades will survive the end of the era, but you can also use an era reward (see below) to remove them.

Using eraStartSpawnNest, you can spawn a single monster nest at the start of the era, which can be used to create a "boss monster", such as the pirate king in the age of piracy.

To enable expeditions, provide a list of rewards in the field "expeditions". The field is also bonusable, so you can provide different sets of rewards depending on what kind of empire sends the expedition.

So for example, if the total value of the ships sent is between expeditionMediumRewardsBoundary and expeditionHighRewardsBoundary, the tooltip will state "Expedition Potential: Medium".

Rewards are used both for expedition outcomes and for what happens when an era ending is triggered. They are the same data structure that is used for monster nests. They should have a name, a title, and an image. And they can also have the following fields:

There are also some fields that control which reward is picked from a list of possibilities for monster nest and expedition rewards. Note that the game never picks rewards that have no effect, such as ones that grant a bonus that an empire already has. Try to have a fall-back reward that is always valid.

Since rewards can both grant and require bonuses, you can use this to tell stories that unfold over multiple expeditions. See AGE_OF_MONSTERS for an example.

Normally, the era modifier description and effects are the strings age_desc_X and age_fx_X, but if you want empires with specific bonuses to have different text, you can use the bonusable values "desc" and "effectsDesc" to specify strings. For example, empires with the REVOLUTION bonus get a different text and info for the Age of Unrest:

Last but not least, EraModifiers can have end conditions. When they are met, the era ends. Empires then receive rewards (or punishments) based on who triggered the end condition.

Here are the fields for the possible end conditions:

A concrete example: Age of Piety spawns three Holy Sites at the start. Once an empire controls all three holy sites, the era ends, but what exactly happens depends on the empire. A normal empire gains 20 reputation. But if it's Cultists, they instead gain the Greater Cult bonus, a massive permanent increase to income and industry, and the holy sites are destroyed:

For the other empires that didn't manage to control the holy sites, there are four distinct outcomes based on whether they are cultists and whether the winner is a cultist:

Once you've added a new EraModifier, you can test it using the "Start Age" cheat option. Note that the game needs to be unpaused for the age to actually start. (And yes, all the cheats in the game started out as tools for testing the game.)

Putting this all together, you can create special game eras that provide variety to gameplay by changing the way the game works and giving the player interim goals. As an example of this, here's a mod that adds an Age of Schism, during which the Trilunar Church breaks into three competing sects you can try to reunite - or destroy, if you're cultists.

As always, if you have any questions about this post, feel free to comment below, and if you need help with modding, hop on the Discord and ask!