I recently - finally - played a bunch of Six Ages: Ride like the Wind. It's a storybook strategy game where you lead a tribe, and the spiritual sequel of the cult game King of Dragon Pass.

It's very much the kind of game I was aiming at with my jam games Annulus and Turtle Town, only realised in much more detail and sophistication. I really like it, but I do feel that it falls short of its potential in some ways, which I want to explore in this post.

Note that I'm engaging in a very specific game developer thing here where I take another game and go on about how to make it even better by adding more stuff. And it's easy and tempting to come up with a bunch of Extra Cool Stuff that would actually ruin a game's scope. So take this as a musing on a potential direction to develop the game's mechanics, not as a "they should have done this".

In Six Ages, you lead a clan of bronze age-ish horse riders who have recently migrated south into a new valley to escape the cold and encroaching glaciers. There are other clans in the valley: other riders, and people who drive chariots, and "Rams" south of the river who worship hostile gods. 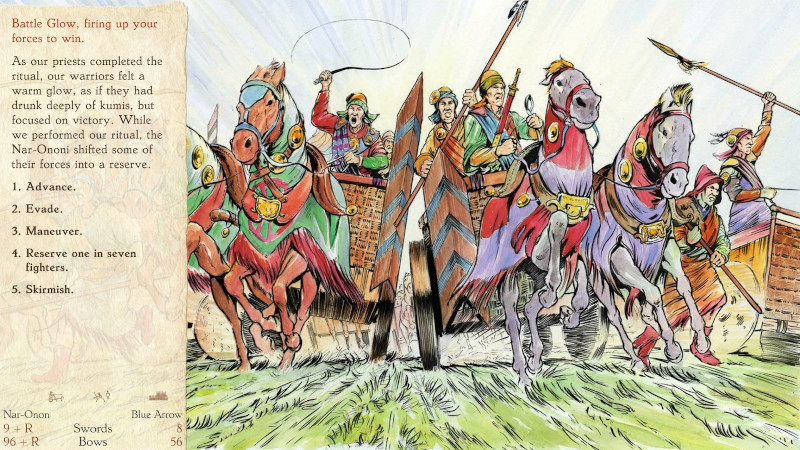 And the gods are real, and at war, and magic permeates every part of the world. Unlike other fantasy settings that are realism plus magic spells and weird creatures, everything you do here interacts with gods, magic, and spirits, from growing food, to making pots, to warfare.

You navigate your clan through a strategy game about getting enough food, tending to your herds, building shrines, raiding, diplomacy, and exploring. After each turn, there are one or more story events that occur: visitors, magical events, clan disputes, the deeds of heroes. To win the game, you must succeed at a specific sequence of story events that is threaded though the game. 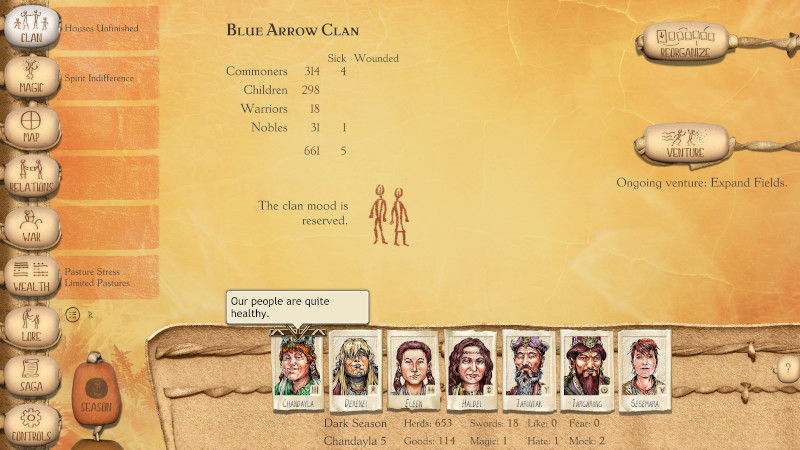 Here I'd like to compare Six Ages to another set of narrative games I've played a fair amount of: Choice of Games' various story games.

Both are what's often called "quality-based narratives", games where your choices in narrative events modify values (qualities), and these qualities in turn determine the outcome of your choices. If you raid your neighbours for cows, your number of cows goes up and their opinion of you goes down. A later event can then use these values to drive what happens.

The useful thing about quality-based narratives is that they're a way to escape the problem of heavy branching in narrative games. In classic "choose your own adventure" style games, the number of story passages you need to write to account for each choice the player makes rapidly spirals out of control. A very short story with five binary choices already requires 63 passages, and a story with ten requires 2047, almost all of which a player will never read.

Instead, by tracking a bunch of values, choices earlier in the narrative can influence events later on without having to double the work for every decision the player makes.

This still leaves a lot of variation in how exactly the story passages are arranged, and this is where Six Ages and Choice of Games games differ:

The arrangement of passages in CoG is what I'd call a "frayed braid". There is a fixed sequence of events, but each event can have multiple variations, and the plot can branch out into different scenarios for a while before rejoining. At the end, the story branches heavily, and the combination of the qualities you accumulated over the game and the choices you make determines the outcome. There are always multiple endings, some victory, some defeat.

6A, on the other hand, mostly uses "storylets", which are free-floating short scenes that can happen in (mostly) any order. They can be triggered by player actions such as exploration, and by the passage of time. Alongside those, there are some fixed story beats that happen at particular points in time. In the end, in order to win, the player must succeed at these fixed story beats. There are multiple forms of defeat, but only one victory, though there is slight variation in how the player can achieve it. 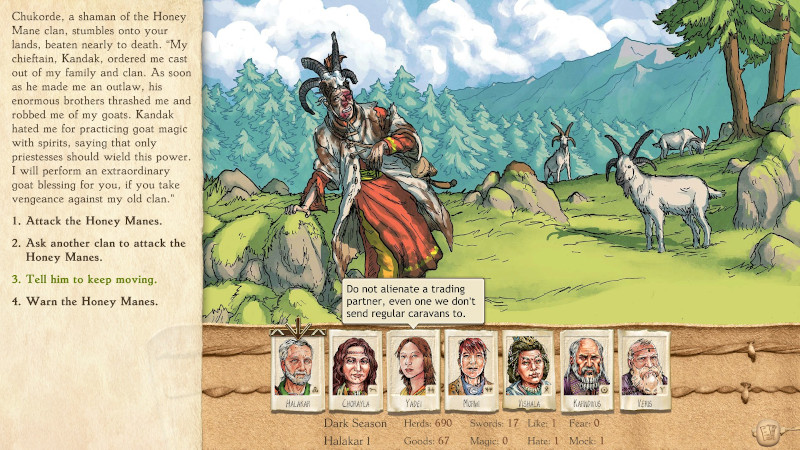 So 6A is more replayable in a way because you don't know what will happen when. CoG games have to stick to a much more fixed series of plot beats. But it's less replayable because in the end, there is really only one way to win. Whereas in CoG, there's a lot of replayability from trying to hit different endings.

The lack of multiple win conditions is really the disappointment for me, because the game is so free-form right until the end where you have to succeed at a specific thing. Replaying it, I know where the story is heading, and I know that anything that does not touch on it directly only matters in terms of how it improves my quality values.

Similarly, while you spend a lot of time setting up your clan's backstory at the start of the game, this does not have that much of an influence on the game. The setup choices change the aptitudes of your leaders, the shrines available at the start, and some clan relationships. You'd expect this kind of elaborate setup to enable noticeably different ways of playing the game, but it doesn't, really. 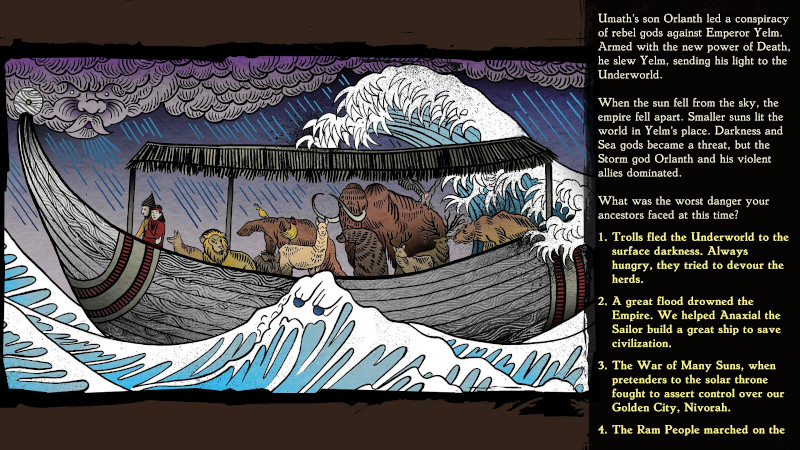 So the game has this whole engine with economics, magic, conflict, diplomacy, and stories, and then restricts itself to using it in one particular way, to tell one story.

Putting my "what would I do better" hat fully on, I would do the following things for an improved version of this narrative structure:

Reduce the number of customization options at the start to a few really impactful ones, let's say five. Staying with Six Ages: Ride like the Wind, these options could be things like whether you can ride horses, whether there is a dominant ruling clan, whether you keep slaves, or are pacifists, or worship a secret god.

Have a pool of five victory conditions, and randomly pick three of them in every game. So there are multiple paths to victory, but you can't just beeline to the victory you want. This means it's worth engaging with the story to figure out how you can win.

Have a pool of five obstacles - some subplot that threatens to spell doom - and pick one of them. 6A does this a bit by varying which non-human enemies you get raided by, but there's no story to it.

That way, there's 5x5x5 starts, victories, and obstacles, leading to 125 meaningfully different playthroughs, while the majority of the game events can remain as storylets that are generally applicable, making the game a lot more replayable with only a moderate increase in needed content.

That said, I am definitely looking forward to Ride Like the Wind's sequel, Lights Going Out, due to release this year.