A lost decade of Swiss games?

I've been contributing to compiling a complete list of Swiss games for a few years. It was started by David Javet, and consists of a Google sheet that aims to collect all computer games ever made in Switzerland. We currently have 458 entries going back to 1987. 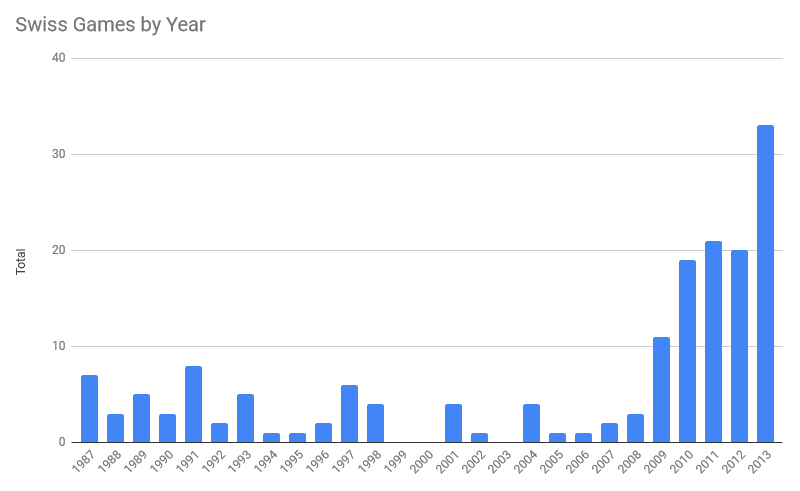 There may simply be a hole in our data. We find games by asking around and checking websites listing old games. So maybe we just haven't found the right people or the right websites.

Or were there just hardly any games released in that decade, and if so, why?

Game platforms changed over time. Before the lost decade, Swiss games were mostly Amiga, Atari, DOS, and Smaky (an indigenous educational computer). After that decade, the major platforms were smartphones and Windows PC.

(Note that minor platforms are not listed on this graph and some games are counted repeatedly because they were cross-platform. Hence, the total number each year is different from the first graph.)

But during the lost decade, Windows PC was already a big games platform, and so was Flash, of which we have only one game in our list. So why aren't those earlier Windows games and Flash games in our list?

So a possible explanation for the lost decade is that there was no way to distribute the games. Something changed about distribution channels in the transition from Amiga/DOS/etc to Windows. Did they become more professionalized and centralized and Swiss developers lost access? Did they shift from floppy disks to CDs and Swiss developers were unable to follow suit?

This still does not explain the lack of Flash games.

Well, I actually made a game in 2001, during that decade. I was 17, and made it using REALbasic for Mac. I wasn't plugged into any Swiss game development scene. I released the game by uploading it to freeware sites and getting it onto CDs bundled with magazines. And I never mentioned that I was from Switzerland because it was not relevant. My game is only on the list now because I know about the list.

So here's my best guess: Before the lost decade, there were games being made for a variety of platforms, and distribution often happened locally. You knew a game was from Switzerland because you bought a floppy disk from a Swiss person, or your computer was a Swiss computer.

During the lost decade, there were big games that required an entire CD, and those were too elaborate to make by small Swiss teams. And there were smaller games, shareware and flash games. Distribution for these games was decentralized, via the Internet and magazines, which gives us no easy way to determine which games came from Switzerland.

When modern digital distribution platforms and the iPhone arrived, this suddenly opened up a lot more opportunities for developers to create and distribute games, and it also centralized the distribution, making it easier to track. That's the cause of the rapid increase after 2008.

Can we find those lost Swiss games? There's some things we can try: looking at Flash portals, asking magazines that were around at the time, asking people we know were active at the time if they remember anyone else. But in the end, there's probably going to remain a lot of uncontactable devs who, like me, just made a game and put it on the Internet.