Actually writing this post has been a bit of a mess, because I'm trying to extract some game design thoughts from what's ultimately a subjective experience.

What are those games?

Armageddon Empires is a cult-ish strategy game from 2007, created by a one-man indie studio. You play as one of four factions in a post-apocalyptic desert reminiscent of Mad Max and Warhammer 40k. 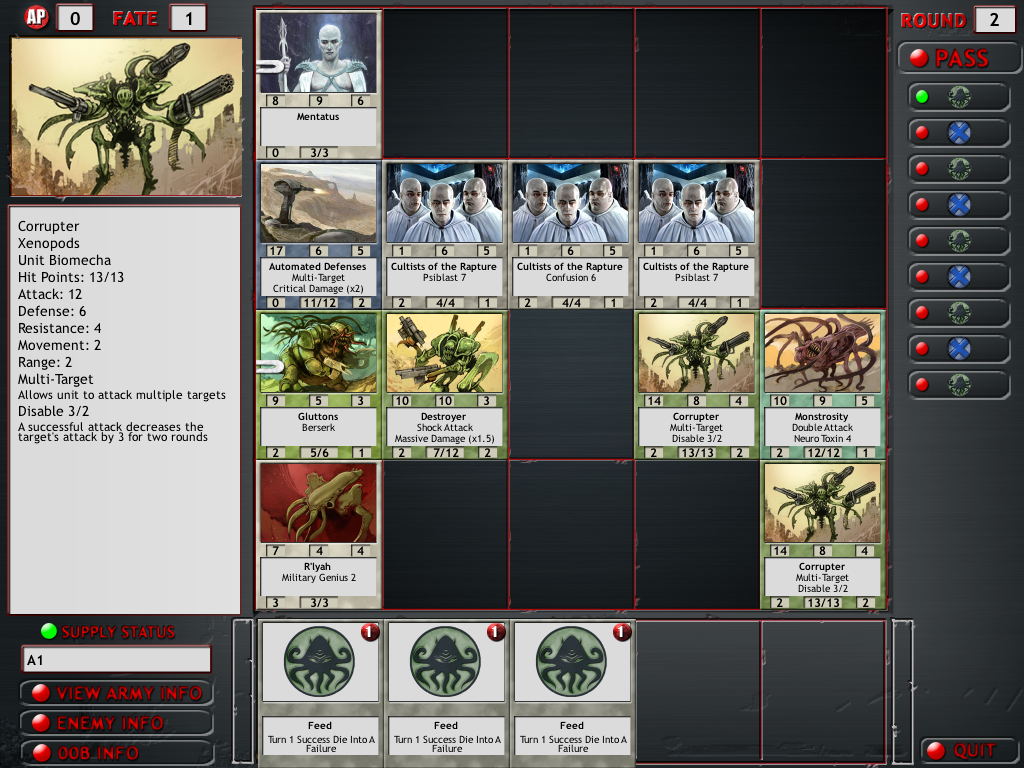 You can play as the militaristic human empire, evil robots, evil tentacle aliens, or dragon-riding mutants. It's somewhere between a hex-based war game, a 4X game, and a card game. You have a limited deck of cards that represent units you can deploy, build armies with, and engage your enemies. Card-based mechanics are popular now, but back when the game was released, this was pretty weird and unique. 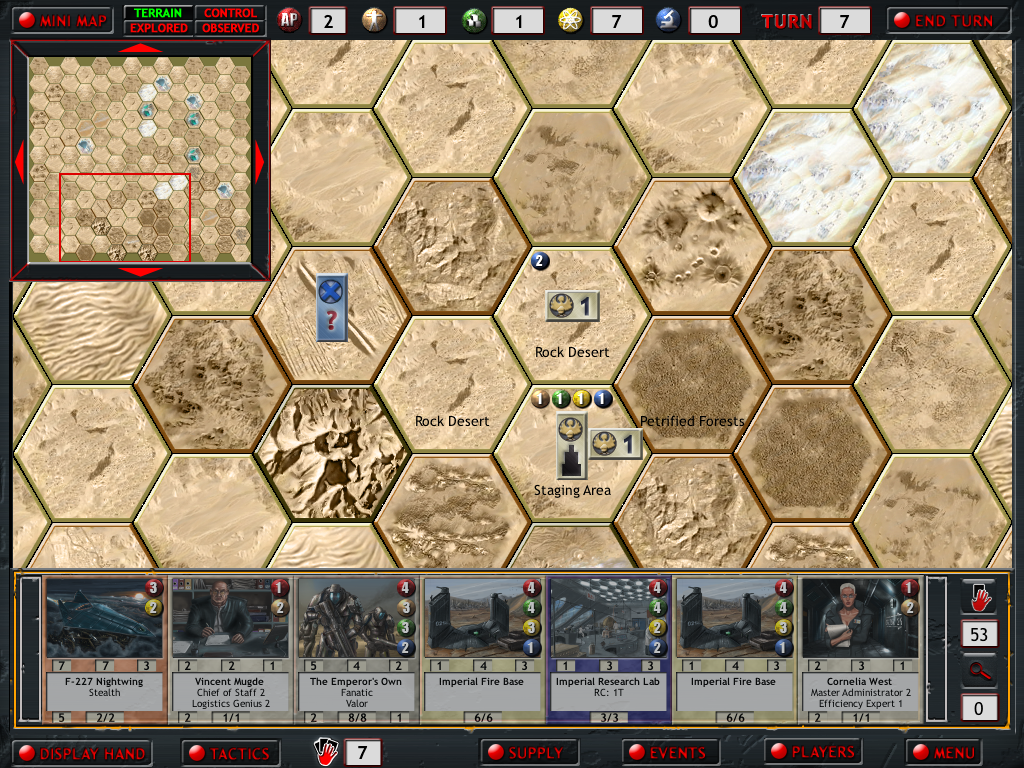 It's not a pure war game, as there is an economic aspect with resources you can gather and produce, and a research aspect with upgrades and munitions you can create. Nor is it interested in grognardy minutae of armor slope and stuff like that. But the main focus is definitely on the fighting. This is not a game where you can turtle and tech up and win on points. You win by destroying your enemy. 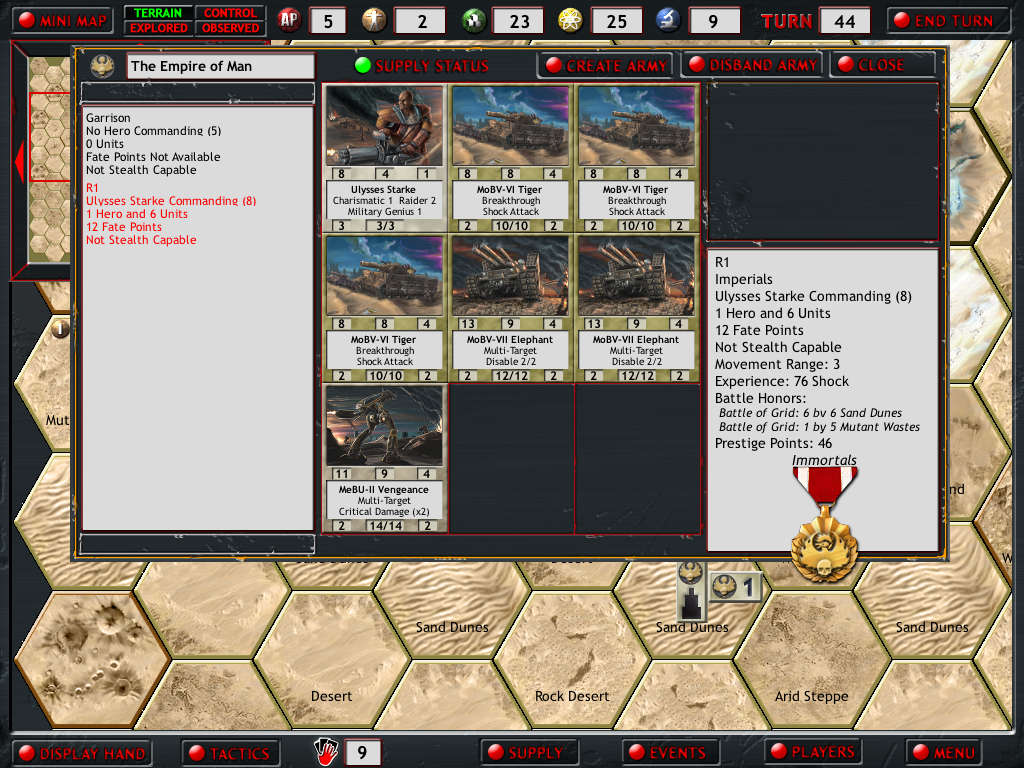 Old World is a Civilization clone, designed, in fact, by Civ 4's lead designer. You do all the usual Civ things like settling cities, improving them with workers and buildings, doing research, acquiring resources, fighting barbarians and other states. You win by accumulating enough points. 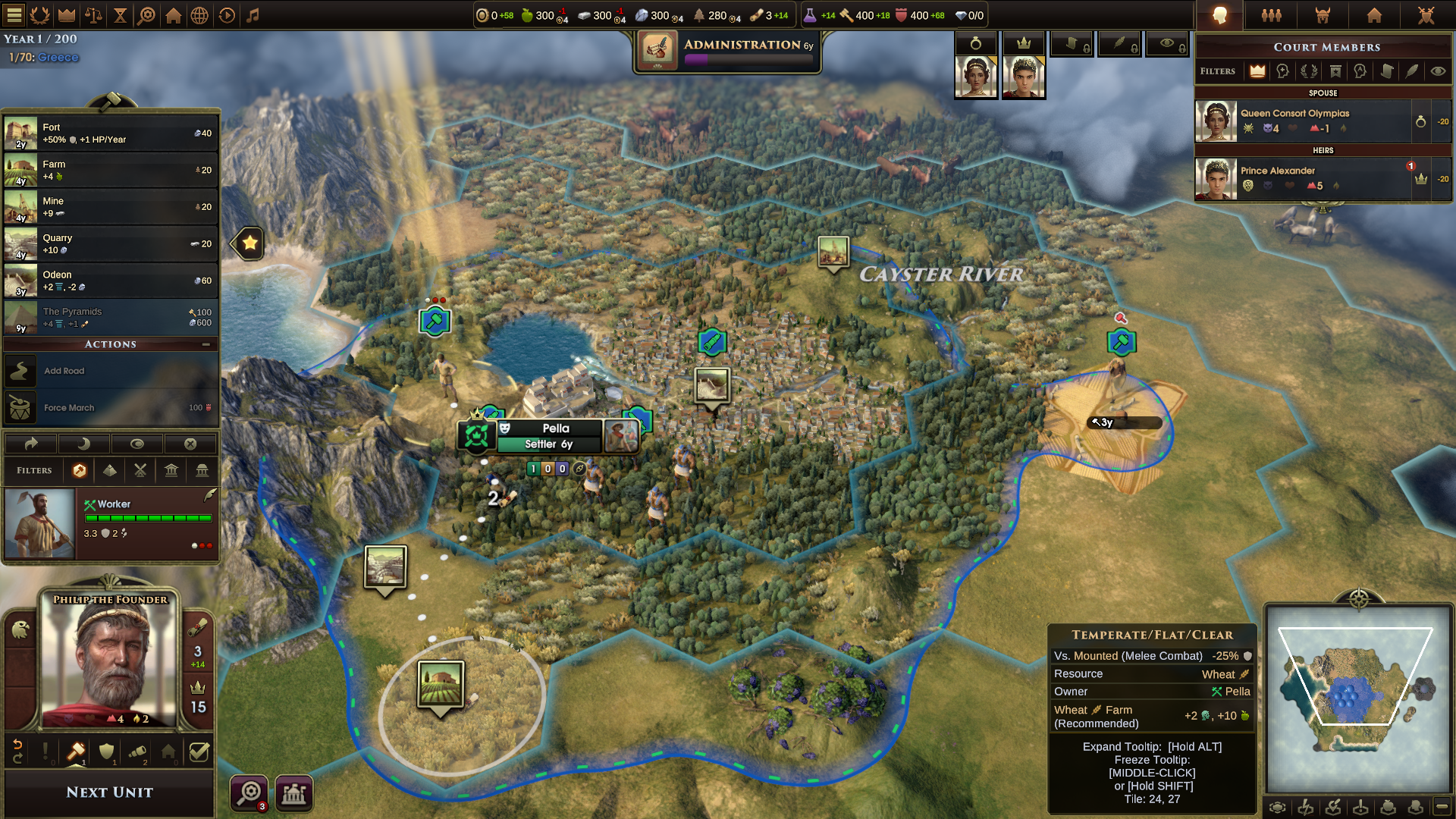 It also adds a Crusader Kings-esque system of ruler succession, where your ruler dies after a while and is replaced by their heir, which means that you should take care to produce some useful heirs, and also keep good relationships with your state's noble families and the rulers of other states. 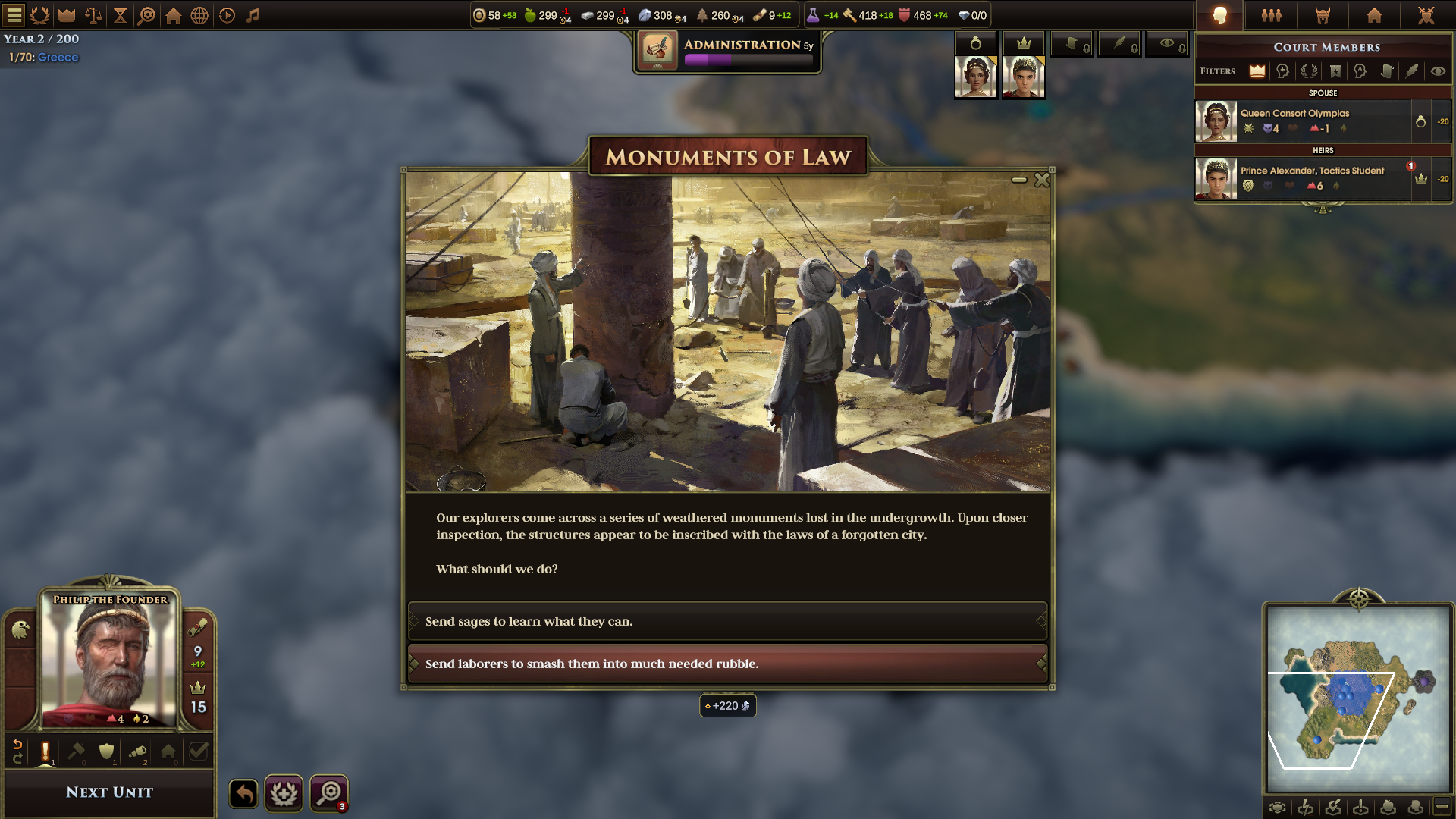 A game is a series of interesting choices.
— Sid Meier

AE is a war game where you have very limited resources and actions, and you have to carefully prioritise where you spend them. I have lost plenty of games simply because I positioned my army badly and left my main base open to attack, or because I struck before I was ready, or because I waited for too long. Games last maybe 50 turns. Combat and other mechanics are handled with dice rolls, which, while slow, are also explicitly visible and produce clear and immediate successes and failures.

OW's gameplay appears to center around the idea of small changes in the accumulation of resources. There's lots of micromanagement of where to put terrain improvements - but those are not interesting decisions: mostly you prioritise what to build, and then build stuff where it makes sense. Or you make a decision about a character's path in life, and their stats change slightly. 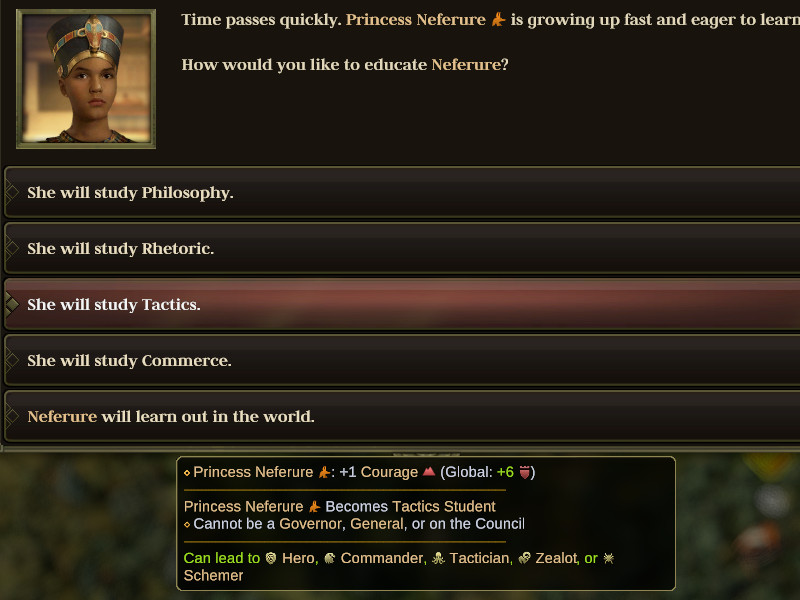 Yes, there's fighting, which can cause sudden upsets, but it's shallow compared to AE. You're meant to win on points, and so a declaration of war from another state often feels like an annoying imposition distracting you from slowly steering your empire through 200 turns of play.

The problem here is that OW fails to give the player clear feedback for their actions. If you mess up in AE, the consequences tend to be fairly immediate and clear. In OW, by the time you've realised that you should have built a bigger army, or more stonemasons, or taught your daughter philosophy instead of rhetoric, it's far too late to change anything.

The Civilization games also have this problem in the late game, but in the early game at least, you get clear impactful decisions. What do you build first? A worker, a scout, a warrior, or a monument? 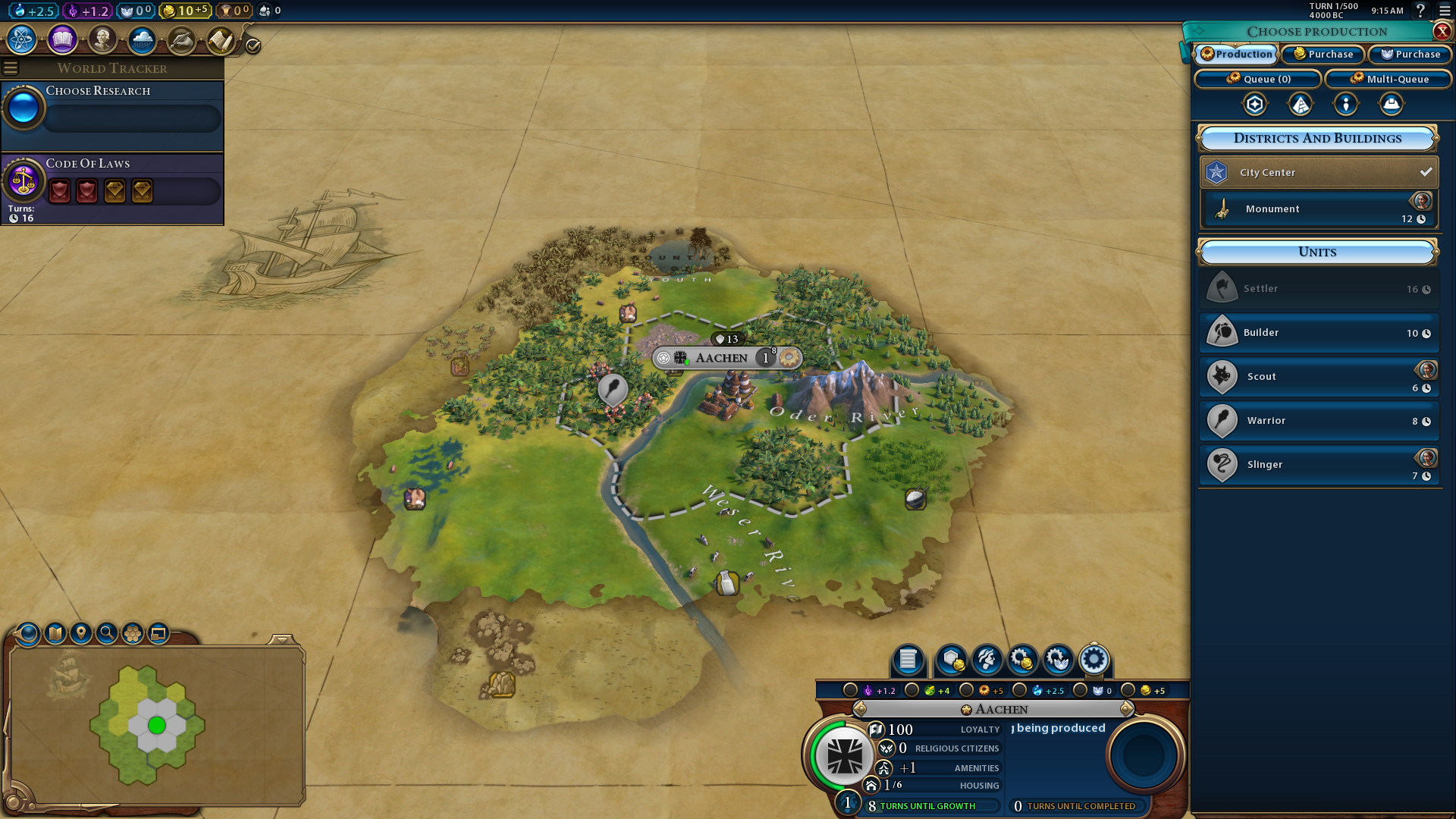 Is it that the target audience of OW likes this bit-by-bit gardening-like approach to games? Is it that the game design looks elegant to the designer even as it makes the player feel like they're feeling their way through a mush of micro-decisions?

Or is it a balancing issue, where the smallness of all the effects ensures that the game is all smooth and balanced for multiplayer? AE is single player only, so it can focus on being interesting rather than perfectly balanced.

I find those micro-decisions and micro-effects very uninspiring. When I design games myself, I absolutely refuse to have an effect that changes a number by less than 10%. Even better are big chunky effects like "double", "half", or "triple". Those noticeably change things, and they can still be balanced with drawbacks and costs.

Another possible reason for the smallness of the effects is the length of the game. If an effect compounds - let's say you get a bit more resources, which you can reinvest into getting more resources faster - after many turns, the effect can be massive. A 5% change can end up meaning a lot if it compounds over a hundred turns. In a shorter game or sub-game like combat, you can have much stronger effects, because even if they compound, there's not enough time for the effect to become completely unbalanced.

AE has no explicit narrative apart from a handful of events related to cultist factions. OW frequently pops up events relating to your family and other concerns of your state, asking you to make decisions.

I tell myself more stories about AE than about OW, because OW keeps on trying to tell me stories, and they're not engaging or coherent. OW's attempts to tell story actually disrupt your own storytelling.

Gluing narrative onto a gameplay-focused genre is very very hard. Even with Crusader Kings 3, which does an admirable job, I just click through most of the events, quickly picking the choice I want without pausing to read text I've seen before. Sorry, writers.

There are limits to emergent narrative, of course. All AE can tell is stories about ridiculous postapocalyptic sci-fi conflicts, but it does a good job of that. It gives us over the top toys to make up our own stories about.

And if I want to have storytelling and family intrigue, I can play CK3 - where again, the stakes are higher and more interesting. Familial strife can tear apart whole empires, and assassinations, seductions, wars can succeed or fail with drastic consequences. 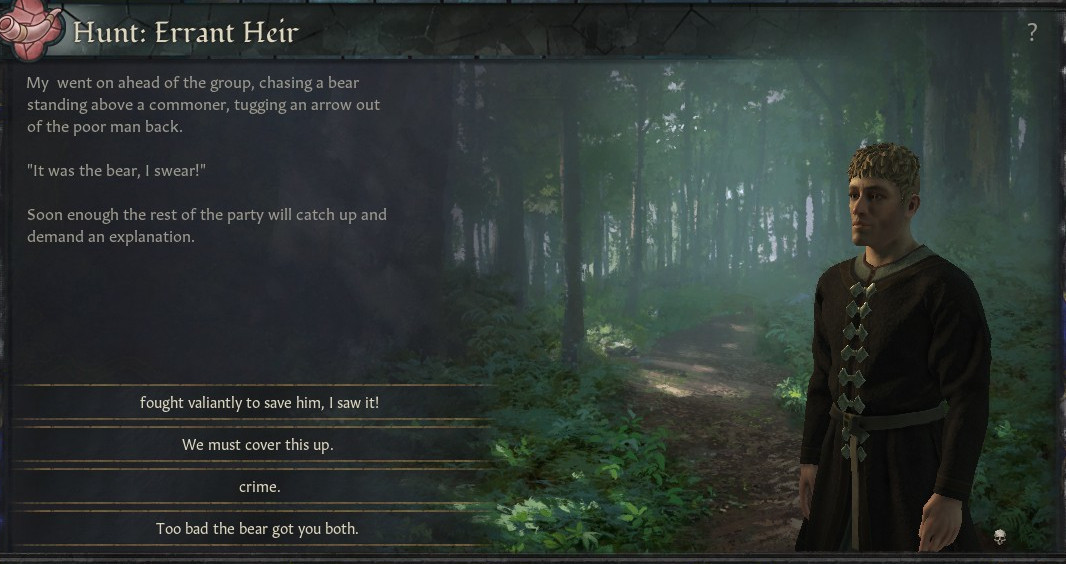 OW's family events, in comparison, are tame and half-hearted.

Attempt to extract some concrete ideas

So what can we learn from this apart from my subjective preferences?

Clear cause and effect matter. A game that's based on accumulating lots of small changes over time feels unresponsive and unclear. A game where you've already lost, but don't know it for another hour of play, is a bad game. A game where you've already won, and you know it, but you have to keep playing for another hour to technically achieve victory, is a bad game.

Strong effects are harder to balance but produce flavour and tension. By keeping the number of game turns limited and picking effects that don't compound, you can have balanced strong effects.

In mechanics-driven games, figure out what kind of story your mechanics tell and lean into that. Support the player in experiencing their own stories, rather than explicitly trying to tell them. If you have events, the less text and the stronger the mechanics, the more replayable and evocative.