I have some pretty strong evidence that the Steam keys from the defunct IndieGameStand are being re-sold.

I'm the developer of a game called Airships: Conquer the Skies. It can be bought through a bunch of platforms, including Steam, and, until it shut down earlier this year, Indie Game Stand.

I supplied IGS with builds of the game and a set of 500 Steam keys to give to buyers with their purchase, which is pretty standard practice. I've done the same with itch.io and the Humble Store.

On June 6 this year, the Indie Game Stand home page was replaced by a short message stating they were undergoing server migration and would be back soon. Instead, on July 25, the site went dark entirely. I didn't receive any messages from IGS about any of this, nor did they send me the (admittedly small amount of) money they owed me for sales.

I just kind of sighed and thought, "well, that's a shame". It did cross my mind that they had not sold the vast majority of the 500 keys I gave them, but with their site down, there was no way for me to reliably tell which of the keys they had sold. I could have revoked the keys through Steam's systems, but I didn't want to punish people who had bought my game!

Over the past few weeks, I have noticed an uptick in the number of Steam key activations for Airships, without a corresponding increase in sales through itch.io or Humble Store. I had a look and found that Kinguin did indeed have keys for my game in stock. I don't do large-scale giveaways, I don't do bundles, I don't do big sales, so where were those keys coming from? Of course, a regular buyer might decide that the download link they got was good enough for them, and that they could sell on the key, but why was this happening so much more now? 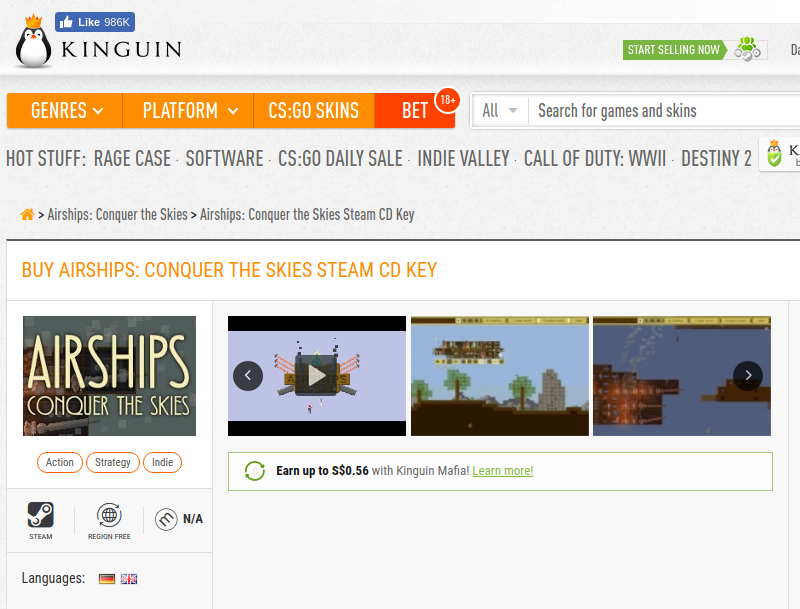 So earlier today, I gave in and forked over some money to Kinguin for a key of my own game. Now, of course I keep records of what keys go where. And yes, indeed, it was an IndieGameStand key.

With the help of my partner, I then went and checked my list of every single key supplied to IGS up to that one to see if it had been activated on Steam, meaning that it had been bought.

Then, there was a gap of 103 keys that had not been activated.

Finally, there was a new group of seven activated keys, starting October 8, 2017, with the most recent one on November 2, 2017.

I think it's highly unlikely that 103 people bought but then didn't activate the keys, followed by seven of them all activating their bought keys within a month, a long time after IGS had folded.

So, in conclusion, I believe that the keys I supplied to IGS have fallen into the wrong hands, and that this person is now selling them through Kinguin.

I have now revoked all of the unused keys I supplied to IGS. I'm also looking into taking further action.

It's pretty likely that if this happened to my keys, it's happened to all the keys supplied to IGS. I mean, why stop at one game? So if you're a developer who supplied Steam keys to IGS, I urge you to revoke them now. And get in touch with me so we can figure out how widespread the damage is, and what we can do about it.