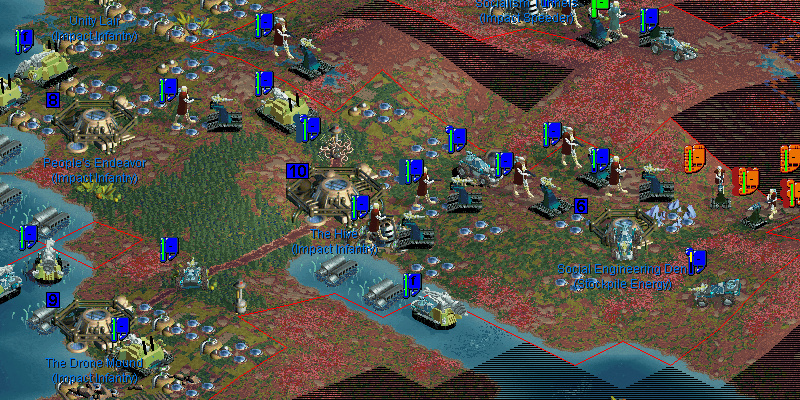 I'm back playing Sid Meier's Alpha Centauri. I play a lot of strategy games, but this is the one I've been in love with the longest, despite its flaws.

It's now more than 20 years on, and kind of an abandoned evolutionary side-branch of the Civilization series. The more recent Civ-in-space, Civ:BE, was explicitly not a remake of SMAC. This was probably wise in that any attempt to directly improve upon a cult game would fall short. The problem isn't the game design, the problem is that the game can't make you feel like you're twenty years younger.

I'm not the only one who thinks SMAC is special. I got back into it because I read Paean to SMAC, an entire blog dedicated to talking about every single tech and building in the game. It's worth reading, especially because Brian Reynolds, the game's designer, makes repeated appearances in the comments. Apparently "Deirdre's got a Network Node" wasn't meant to be a double entendre...

So what makes it so great? What distinguishes it from a game like Civ 6, which of course is rather prettier and more polished?

Mechanically speaking, it's a more raw and detailed kind of game. Especially considering it came after Civilization 2, it's a vastly more complex beast. The ability to design your own units stands out especially, which allows for a lot of cool creations, but is a balancing nightmare.

It's a more stats-driven game, which does mean it loses personality when it comes to units and terrain. Synthmetal sentinels or gatling rovers aren't as evocative as spearmen or tanks. The terrain yields are driven by elevation, rockiness, and rainfall, which again is far less flavourful than a forest or a swamp.

It makes up for this in other areas: The technologies and buildings evoke a detailed and fascinating world, especially through the use of quotes from its faction leaders. The blog above goes into this in great detail.

And the factions and their leaders are where the game really shines. Here are seven characters, and seven worldviews, at ods with one another. Some of them are more sympathetic than others, but none of them is wholly likeable or entirely without redeeming characteristics - or at least fascinating ones. Yes, Sister Miriam is a religious fundamentalist, but she's also the one asking hard ethical questions. Yes, Chairman Yang's plans are monstrous, but there's something compelling about his particular brand of nihilist philosophy. Deirdre Skye sounds like a nice lady until you realise her way of waging war involves worms drilling into people's brains.

It comes as no surprise that Reynolds studied philosophy. Where Civ games are games about history - and moreover about a very particular idea of history, a myth of progress and ethno-states, SMAC does far more.

So is it the best game ever and we should ditch all newer strategy games and return to it? Of course not. It's afflicted with the same problems that the Civ series always has: an exciting early game gives way to vast amounts of micromanagement. The AI varies between "stupid" and "stupid and aggressive, with massive bonuses", depending on the difficulty level, so the endgame inevitably devolves into a giant war.

Are these things fixable? Maybe. But it's not just that. Time has moved on, and a direct remake of the game would now feel dated. It can't make you feel twenty years younger. But there are definitely lessons to be learned here. And you can get it on GOG for very little money right now.